« One Dog and his Boy review 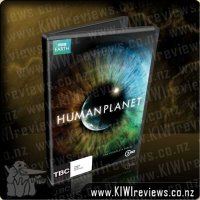 Following the global success of Planet Earth on DVD, with sales of over 5.4 million, Roadshow Entertainment on behalf of BBC is pleased to announce Human Planet, the latest breathtaking series from the Natural History Unit, will be available on DVD and Blu-Ray from 23 November 2011.

Human Planet examines the extraordinary ways human beings survive in the most hostile environments on earth. Awe-inspiring and astounding, this series turns the camera on ourselves, the human species. Three years in the making and filmed in over 70 locations using HD cameras and state of the art equipment, this ground -breaking series brings you stories that have never been told before.

Each one of the eight episodes takes the audience on a journey to reveal real life dramas about men, women and children and how they have used their remarkable adaptability to survive and thrive in the most remote places imaginable.

Humans are the ultimate animals - arguably the most successful species on the planet. From the frozen arctic, to steamy rainforests, from tiny islands set in vast oceans to the driest deserts we have found astonishing solutions often in the face of extreme adversity.
•  Oceans - Into the Blue.
•  Deserts - Life in the Furnace.
•  Arctic - Life in the Deep Freeze.
•  Jungles - People of the Trees.
•  Mountains - Life in Thin Air.
•  Grasslands - The Roots of Power.
•  Rivers - Friend and Foe.
•  Cities - Surviving the Urban Jungle.

Human Planet is brought to you by BBC Earth, creator of 50 years of outstanding natural history content. With John Hurt narrating and a stunning soundtrack by multi-award winning composer Nitin Sawhney this DVD also includes amazing extras such as a featurette based on the hardest volcano shoot ever and Behind the Lens with the cities team in Morocco.

The Blu-Ray format of this ground breaking series will also take you further into the world of Human Planet with Blu-ray Live content.

As seen on Prime TV.

BBC's epic eight-part documentary series HUMAN PLANET is a fascinating celebration of humanity's ability to adapt to all environments across the globe, from the comfort of modern cities to the outright hostility of jungles, oceans, and the frozen wastes. Typical of the BBC, the footage contained in each episode is some of the most spectacular yet to be filmed, taking full advantage of improvements in filming technology and accessibility to remote regions. Each episode (covering Oceans, Deserts, Arctic, Jungles, Mountains, Grasslands, Rivers, and Cities) tells several stories relating to how communities survive in their particular environments, and the lengths people go to live in some truly difficult places is at times humbling and deeply admirable.

Where HUMAN PLANET shines most is when it focuses its gaze on the more remote people of our planet. Whether displaying the tribal courting rituals of the Wodaabe people in Niger, the mussel gatherers of Arctic Canada, or the monkey breastfeeding of the Awa Guaja in the Amazon, each episode manages to highlight the remarkable existences carved by communities well outside of our seemingly civilized world. Actor John Hurt delivers the narration with appropriate gravitas, delicately pitching whatever tone is most appropriate for the images on screen, whether dramatic or whimsical. That said, Hurt is merely an acceptable second choice, and HUMAN PLANET could certainly have been improved had legendary documentarian David Attenborough been involved.

Whatever the reasons for Attenborough's absence, it also in a sense highlights what many people will no doubt have problems with concerning this series. With previous series such as PLANET EARTH or LIFE, the BBC have removed humanity's presence from their footage as much as possible, yet here we are placed at the centre of the narrative, and, while certainly interesting, pointing the cameras at us isn't always the most pleasant feeling. HUMAN PLANET pulls back the curtain a little on previous BBC nature shows, and the sense that there are always people lurking just outside the frame, ready to swoop in and exploit the natural world is a little unsettling. For the most part, the indigenous people the series focuses on are taking what they need out of necessity rather than greed, but there are hints about the destruction we are causing to our planet. The final episode, Cities, is the most illuminating in terms of the damaging effects of humanity's spread, but clearly this was not the intended purpose for this series. There is much unsaid, but in the end HUMAN PLANET is a worthy addition to the BBC's vast catalogue of nature documentary series, and has infinitely more value than the majority of what's on our TV screens today.

NZ Airsoft offers resources to players interested in starting a new sport, Airsoft clubs and Airsoft retailers in New Zealand. We also provide information to the public to help promote Airsoft as a fun and stimulating sport in New Zealand, and can arrange private or corporate games, even access to club-level games in a number of ... more...