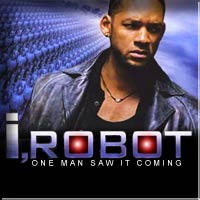 Set in a future Earth (2035 A.D.) where robots are common assistants and workers for their human owners, this is the story of "robotophobic" Chicago Police Detective John Spooner's investigation into the murder of Dr. Alfred Lanning, who works at U.S. Robotics. A robot, Sonny, appears to be implicated, even though that would mean the robot had violated the Three Laws of Robotics, which is apparently impossible.

It seems impossible because... if robots can break those laws, there's nothing to stop them from taking over the world, as humans have grown to become completely dependent upon them. Or maybe... they already have? Aiding Spooner in his investigation is robo-psychologist, Dr. Susan Calvin, who is highly sceptical of Spooner's theories. After all, who ever heard of a robot committing ANY crime, let alone murder?

Story suggested by the novel of the same title by Isaac Asimov.

I always enjoy futuristic movies. Always attempting to answer the 'What if" questions that people will contemplate when confronted with new technology. I, Robot attempts to shed light on the differing opinions regarding robots. Most viewers will fall into one of two categories; those that are excited at the possibilities of autonomous robots, and those that are concerned, or even fearful of creating something that is stronger than us, lacks the biological weaknesses that we have, and have a higher cognitive function (they can think really quickly).

I myself, have a mixture of the two, which makes me conflicted, and conflict is something that is present quite a lot in this film. As with most robot creations, they are programmed to not harm any humans through action or inaction. This law in itself would be able to quell the fears of those that mistrust robots, but within the opening scene of the movie, this law is challenged, and Will Smith finds himself investigating the possibility of a robot committing murder.

During the investigation, a lot of time is spent exploring the relationship that the robots hold with the humans, and does a good job to answer as many questions as possible. I enjoyed this film, although I found the CGI to be a tad unrealistic. It, however, opened the floodgates, and I ended up contemplating whether I would accept robots in the future society for several days afterwards.

I, Robot, another Will Smith focused movie so I wasn't too sure about it when we went to see it at the movies.

Robots are the new must have accessory, carrying out menial tasks for households and boosting profits for businesses that have workforces not requiring payment. While this is now the norm, Officer Del Spooner refuses to move with the times and, due to an incident in his past refuses to accept the robots as anything approaching human. When an old friend is found dead everyone suspects suicide but Spooner suspects a robot that flees the crime scene, but soon he's uncovering an even bigger story happening behind the scenes.

The plot is rather predictable, I knew what was coming, there were no surprises to the storyline for me. The acting was sub par and I wasn't really invested in either side of the equation, the robots or the humans and who would win. I mean, you want the humans to win because in that situation the robots winning would be a bad thing, but you're also there hoping that they improve upon things and fix things for the long run so that humans and robots can live in harmony.

An ok movie but it could have been better.

As a kid, I encountered a lot of Sci-Fi authors during my many, MANY days in the library... but none struck a strong a chord in me as Isaac Asimov. His Robot books drew me in and held me with a magic that was powerful beyond words... Asimov's stories inspired my creative impulses, and for that I will always hold him to be the Master of Masters.

So it was very exciting to hear that another movie was being made that was based on one of Asimov's books, especially one of the Robot books. After the utter disappointment I felt at the way Bicentennial Man was butchered, I was hoping I, Robot would have a better outcome. Alas, no such luck.

Now, you might not understand my disappointment, considering the score I have given it, but allow me to explain. This movie had a plot that was suggested by the novel of the same name... however, with only a few character names in common, this was NOT the story Asimov wrote... just a rip-off plotline, heavily hammered into a new shape by the hollywood scripto's.

If I completely disregard the original storyline, and look at this movie as though I had never heard of Isaac Asimov and his stories, well, this is how I would score it.

I plan to add this one to my collection, simply because it is a fairly cool flik in it's own right, with some good action scenes, some awesome special effects (I really loved the way they did the V.I.K.I. holoface) and a story that stays consistant throughout the movie.

I am also a fan of movies that have 'Trail of Breadcrumb' plots... where you have to solve a riddle to reach the next clue, which helps you decode another clue, and on and on until you unlock the Big Picture and everything falls into place. This story has that effect in Aces.

Overall, Yes, I could see this happening if we get into advanced robotics, however with Biotechnology and Genetic Engineering leading the pack of 'High-Risk Sciences' I think we'll be safe from rampaging robots in the near future. The movie is a fun way to blow 110 minutes +/-.

When the mayor decides that the doors of the police academy be open to any and all, the applicants swarm forth like hordes of losers in a colorful assortment of non regulation sizes, shapes and eccentricities.