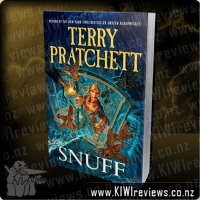 It is a truth universally acknowledged that a policeman taking a holiday will barely have time to open his suitcase before he finds his first corpse.

Commander Sam Vimes of the Ankh-Morpork City Watch is on holiday in the pleasant and innocent countryside. But not for him a mere body in the wardrobe. Rather, many, many bodies - and an ancient crime more terrible than murder.

They say in the end all sins are forgiven. But not quite all...

The Chimpanzees of Happy Town
Rating: 10.0

Underneath a Cow
Rating: 9.9

I have had the pleasure of reading every one of Sir Terry Pratchett's Discworld titles and quite a few of the rest. This one was particularly intriguing as it contained fewer bad puns and a lot more grit and actual plot than some of his other recent titles. I really liked this one, a lot more than I thought.

The Goblins were, by far, the most fascinating of the characters. Not having come across them in any detail in any previous titles, it was wonderful to begin exploring a new race in this tale. Far from being the 'vermin that are slightly more evolved than rats from anywhere other than Ankh-Morpork (A-M rats being quite evolved really)' these people turn out to be... well... people. They have one of the most complicated languages known on the Discworld, have logical - if somewhat distasteful to human - religious practices, and most importantly understand the "mathematics of necessity" that puts the survival of the species ahead of the individual.

What gets me the most about Terry's works is that underneath the fun and frivolity, there is a commentary on the world of today - events, crises, ethical and moral dilemmas... you'd be surprised what you would see if you dug up the "current events of the day" 1 or 2 years before you read the book - since that was when it was being written. He has a way of taking the absurdities of our world, twisting them into the Discworld frame of references, and giving us a somewhat less guilt-ridden way to examine our own behaviours... and have a good ol' jolly laugh while we are about it - very much in line with the adage "A spoonful of sugar helps the bitter medicine go down".

Overall, another brilliant offering from the master of the Discworld universe... though it may not appeal to everyone due to some rather distasteful scenes, and even a few rather nauseating concepts that only the most hardy can contemplate without feeling a bit squiffy.

Every child loves a snow day - no school and snowball fights galore! But Sam has to wait for Granddad, even though all the other kids have already gone to the park... and all the dogs... and all the zoo animals! Only when the two finally arrive does Granddad see why Sam was in such a hurry - and they have the best time playing with everyone in the snow.