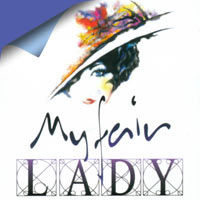 Disclosure StatementFULL DISCLOSURE: A number of units of this product have, at some time, been supplied to KIWIreviews by the company for the purposes of unbiased, independent reviews. No fee was accepted by KIWIreviews or the reviewers themselves - these are genuine, unpaid consumer reviews.
Available:
August 6th - 21st

Perhaps the most popular musical of the 1950s, My Fair Lady is a stageshow adaptation of the George Bernard Shaw novel, Pygmalion. The story revolves around Eliza Doolittle, a coarse little peddler of flowers in Covent Garden who agrees to take speech lessons from phonetician Henry Higgins in order to fulfill her dream of working in a flower shop. Eliza succeeds so well, however, that she outgrows her social station and - in a development added by librettist Lerner (one of the Stageshow writers) - even manages to get Higgins to fall in love with her.

My Fair Lady opened at the Mark Hellinger Theatre on March 15, 1956 and enjoyed a run of 2,717 performances which lasted more than nine years. The original production featured Rex Harrison as Henry Higgins and Julie Andrews as Eliza. The 1964 film version starred Rex Harrison, Stanley Holloway and Audrey Hepburn.

'Oh, wouldn't it be loverly'

As I have only seen the movie version of this story, once, I didn't have too many preconceived ideas on the story, and not having had the apparently harrowing school-based introduction to 'Pygmalion' as my fellow reviewer, I was eager to see how our local theatre group would tackle it. The choice of two actors, David Mahoney and Val Andrew, with previous experience in the main roles, was what helped me to believe more in the relationship between the leads

Of all the events I have attended at our beloved Regent Theatre, I was soon pleased to find out that this show would be entertaining, well acted and had an ensemble cast who knew their parts well. Some possible technical problems with the microphones early on made understanding what was being said a little dificult, but that soon seemed to be fixed. The construction of the sets was fantastic, allowing the watcher to immerse themselves even further into the story.

From familiar sounding - but not sure where from - songs, to well choreographed dance numbers, I found myself completely caught up in the flow.

"Eliza, where the devil are my slippers?"

Isn't it strange how one's preconceptions can be overturned in a mere 3 hours? After spending weeks having "Pygmalion" metaphorically rammed down my throat at high school, I could not haved cared if every copy in the world had burst into flame and been destroyed... so it was with some pre-meditated sense of dread that I decided to attend.

Basically, I went because I knew many of the cast and crew, and wanted to see what all the fuss was about. On top of that, I know that only quality shows make it into the wonderful Regent Theatre on Broadway. And I am now so very glad that I did!

The night started with an invitation to journey up to the Regency Room on the second floor, to attend a pre-show gathering of Palmerston North's 'upper crust' including some very lofty and important personages. I felt distinctly middle-class amongst these social high-fliers and power-people. However, the sheer quantity of Notables attending gave me a very good idea of just what sort of show I was about to watch.

As I sat down amongst the premiere decor and a capacity crowd for the opening night, I felt a sensation akin to a mild electric charge running over my skin, a tingle of anticipation I was at first unable to explain. It took me a few moments to realise that despite the fact that the audience was still filing in to their seats, the show was already underway. Behind a foggy screen, I could see the cast already gathered around the fake fire-in-a-drum, surrounded by pillars and the evidence of a life-on-the-street in Victorian-era London. The lights dimmed, the band started to play the opening tune, and the show was underway.

It really didn't seem like 2 hours until intermission, but my watch is never THAT far out of time, so I was astounded to realise that I had been enthralled since the curtain lifted at 8pm. I still find myself unable to explain how a stage-adaptation of a book I detested could capture me so totally, except to offer the theory that it was simply the stunning performances of a group of dedicated and highly skilled thespians. (No, it means 'stage actors.')

I grabbed at the chance to stretch my legs a bit, so I wandered out front to get a beer, decanted it into a plastic cup and returned to my seat to compare notes with the other reviewer who attended, and shortly the curtain rose again to continue the story, taking up the plot at The Embassy Ball. A mere hour-and-a-bit later, the closing quip from Professor Higgins to Eliza, and that was the show.

Overall... a long show, but oh so very worthwhile. The acting was a prime example of consumate skill, even the ensemble performed perfectly, keeping the story alive and in character, despite some very rapid scene-&-wardrobe changes. A brilliant performance from the lead actors and actress, of most note, the wonderful renditions of Colonel Pickering (Richard Mays), Prof. Higgins (David Mahoney) and Eliza (Val Andrew). Val's skill was most clearly illustrated by her easy and excellent progression from Drawl to Pearl diction.

I found this to be certainly one of the most thoroughly captivating stageshows I have seen, ever. Simple as that.

After serving as a British Army nurse in World War II, Claire Randall is enjoying a second honeymoon in Scotland with husband Frank, an MI6 officer looking forward to a new career as an Oxford historian.

Suddenly, Claire is transported to 1743 where her freedom and life are threatened. To survive, she marries Jamie Fraser, a strapping Scots warrior with a complicated past and a disarming sense of humor. A passionate relationship ensues, and Claire is caught between two vastly different men in two inharmonious lives.

"Outlander" is adapted from the best-selling books by Diana Gabaldon.