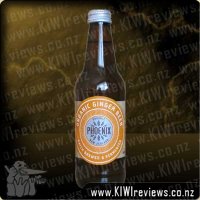 Organic Ginger Beer is where we started. So we have a strong emotional attachment to this little beauty. We bought the "ginger beer bug" for 50 bucks 21 years ago. What a steal!

Certified organic, GE free, and packaged in a convenient and resealable 330ml glass bottle Phoenix Organics has available a great 'How to make ginger beer' resource for schools. If you're a teacher or student and would like more info about this, please visit the website for downloadable resources.

I love ginger beer. It is one of my favourite, non-alcoholic drinks and has been a staple party drink for me over the mummy years when I have to stay sober and in control of the child.

Phoenix Organics is one of those brands that I know and trust. I love their organic fruit juices and I LOVE their ginger beer. Its not overly sweet. But has that great refreshing ginger beer taste with an added twist of lemon which surprises your taste buds, but tastes sooo right with the ginger as well.

I buy this time and time again, because the taste is so consistently good. The price is good, and when purchasing from a cafe is in line with other brands of drink. I'm not usually swayed by products that advertise that they are GE free or organic, but if those things are important to you then you'll find them here.

I also kinda like the fact this is packaged in glass. Glass just doesn't taint the taste of drinks like plastic and aluminium can. But its still recyclable, for the win!

As an old fashioned ginger beer fan from way back (dad used to brew his own in the garage), and a fan of Phoenix Cola and Lemonade, I was excited to find Ginger Beer in the fridge at the local cafe. Ginger beer is one of those magical potions that seems to lose the core flavour component (ginger) and take on a character all of it's own. Or at least, good ginger beer should. Distinct from ginger ale, or lemonade, a well brewed ginger beer should balance sweet with body. Unfortunately, I found that the Phoenix Ginger Beer lacked both, compromising more as a root ginger flavoured lemonade. Disappointing, when balanced with the other great original carbonated drinks that discern Phoenix from other cafe cooler brands. I'll stick to the honey flavoured lemonade.

This was surprisingly very nice. I wasn't at all sure what was going to come of it, as I am not the greatest of ginger fans except in Asian cuisine or good ol' Schweppes Gingerale when I have an upset tummy.

Having had unpleasant experiences with other branded Ginger Beers, I was expecting a sharp hit of Ginger and a lot of fizz, but instead I was greeted by a smooth, mellow drink that had a good Ginger flavour but no kick and no overpowering sharpness. It was sweet enough to be a nice winter drink, but also had enough crispness to be nice over summer.

It did come with a noticeable amount of sediment. This can be a turn-off for some people, but as a drinker of many an assorted natural juice drinks it was but a moment of effort to give the bottle a few gentle turns to mix it through. Don't give it a hardy shake though, as you will en\d up with a frothy mess down your hand. This drink IS carbonated. After mixing, the solids were reasonably insignificant in any given mouthful, and I found them reassuring of the natural, organic nature of the drink.

In summary, as a major ingredient in a punch or cocktail, this would be brilliant I think, though I also admit it will be an acquired taste for some. If you like Ginger even a bit, then this will be worth trying, but if you love Ginger to a big degree, this may prove a little tame for your tastes.

I must admit, this drink wasn't as good as the cola, but it was still rather delicious! This drink was alcohol free, so I was allowed to drink it, and I could tell that it didn't have any bad chemicals in it because I took a whiff and didn't smell any alcohol. It was certainly ginger-tasting enough for me, and the carbonated water added a nice little fizz on my tongue, thumbs-up to Phoenix drinks!

I have to say that the colour of the bottle made the beverage look like actual beer, so if anyone that looks too young for beer is seen drinking this, they might have to do a little show-and-tell with the label to prove that it's alcohol-free, and possibly do a few smell testings! All in all, I would say that this drink would make another yummy drink to take with you on fun trips, and people as young as 11 can drink this stuff!

Once again, the price is fantastic, these guys certainly know how to make people fond of their beverages, I know that I've found my new favourite fizzy drink brand. I found that it went down quite fast, It was all down my gullet in a few minutes, and the cola took a little longer. I am sure this drink will catch your attention, you will love it, trust me. Enjoy!

Having tried some of the competing 'Ginger Beer' on offer out there, to say I was somewhat reluctant would be an understatement. Frankly, I was expecting the worst... not because I thought less of the product, but more because I am not a fan of ginger in any form other than "in food" or as a dry Gingerale.

Surprisingly, for me, this was far closer to a good gingerale than any Ginger Beer I have come across in the past. There was a sweet tang of ginger, but nothing as sharp or overwhelming as I was expecting, and the whole feel of it in my mouth was quite appealing.

Because I wouldn't drink it very often - it still didn't grab me THAT much - I would explore more of the alternative uses of it. I think this would make a wonderful base for a sauce, or as part of a dessert cake of some kind. Because of the acidity, I hesitate to suggest it in a cheesecake - one of the staple "benchmark" dishes we try in the #FoodLab - but you know, reduced down, it could make for a wonderful caramel to drizzle over a finished cheesecake or cake of some kind...

Overall, intriguing, surprising, but in the end still not enough to convince me, despite being a most eloquent exception to the general rule encountered thus far when it comes to Ginger Beers as a trend.

The very moment you first taste Two Rooks, you will understand that we have set the standard for Cola extremely high.

There wasn't a top shelf cola until now.