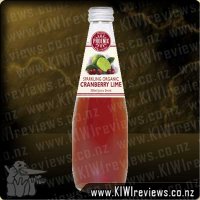 An intriguing synergy of flavours - the piquant zestiness of lime with a hint of cranberry bitterness, charmed into balance by apple and red grape.
Ingredients

I want this in bigger bottles! This was amazing. Crisp and refreshing, all natural and organic. One could not ask for a better drink for Summer.

Being a total fan of Summer BBQs and making a big bowl of something amazing for guests to drink I think this would be excellent as a base for an amazing punch, or even just on it's own. For those "No Kids Allowed" events mixing this with some white rum and a lot of crushed ice would be a perfect mixer for hot, muggy evenings. In fact, I think that would make for a great drink to share around a campfire on the beach, where allowed.

In summary, I think this was one of the best fruit drinks I have come across in a long time, and I am shocked to recall walking past it in the supermarkets so many times and thinking "Oh, it's just another fad brand showing off the same stuff". What a fool! This is a gem hidden in plain sight.

I must admit that this drink wasn't the best in the set, but it isn't the worst thing I've tasted either; I'll give the taste and appeal a rating of 5. The drink had had an odd trace of something like alcohol, and after the first sip I started reading the label, searching for alcohol amongst the ingredients, I even took a whiff of the drink seeing if there was even the slightest hint of it, but I soon convinced myself that It was okay.

I would only buy this drink if I were in the mood for something like this, the chances of which are rather slim. I actually think this drink could've had the carbonated water subtracted from it, it might have made it taste better; and just so you know, I'm not complaining about this beverage, it could have tasted a lot worse, that's for sure.

The cranberry and lime drink wasn't bad enough for me to not want to try the others, and so far it has been a 2 against 1; there have been 2 absolutely delicious drinks, and 1 not-so-good drink, so I still have high hopes for Phoenix. I didn't get a lot of lime flavour in the mix, I think this drink could do with an amount larger than 1%. It is also a great way to lift up your Vitamin C levels, since some of this drink is made from citrus fruit, you can drink it without having too much sourness you might get from eating limes.

I think this drink could be okay for anyone as young as 10 years old, it doesn't have as much sugar as the cola and ginger beer, in fact sugar doesn't come up at all in the ingredients on the label. This would be okay for long trips, although I would suggest sticking it in a chilly bin so that it's cold and refreshing when you want it. I hope you find this drink good, maybe you could try adding more juices to the mix, and see if that helps. Enjoy!

I was quite pleasantly surprised by this flavour... I was expecting something a lot more tart and crisp, but was pleased by the hint of tartness but an overall smoothness that made it quite refreshing and 'clean' in the mouth.

I admit though, it wasn't my favourite of the 7 flavours we got to review... which is a pity, but there you have it. It wasn't my LEAST favourite though, so that's a bit of a saving grace.

The natural flavour and clean crispness lent itself to some fun experiments... using it in mixers with vodka or gin seemed the obvious start, and though I don't have any gin on hand, a touch of vodka was available and made for some interesting drinks. Some crushed ice, a few splashes of McCashin's 26000 Crystaline vodka, half a bottle of this, and some fresh mint, all whizzed up in the trusty Magic Bullet made for something amazing, if I do say so myself. Thankfully, I had the house to myself so no-one heard the loud and off-key singing that resulted.

Overall, a very nice drink and one I suspect I will have again, but needless to say one that is worth keeping a few bottles of for when company rolls around... with it being BBQ season, that's all too likely. Best to buy it from your supermarket, as buying it per-bottle at a cafe could prove costly.

This drink is a winner. Having had a few too many years not drinking alcohol, drinks like this are a fantastic alternative. I am a bit of a cranberry fan and enjoy a nice cold cranberry and soda so this is a nice twist with the lime, apple and elderberry juice added it gives some fullness to the drink which can be missing with straight cranberry and soda.

I rather suspect that if you are wanting a mixer with your vodka or gin that you should go straight to this! A perfect summer tipple over ice

It is a very crisp refreshing drink. I will definitely be purchasing this again.

After hearing that opposites attract, we married the tangy, pucker your lips attitude of blackcurrant to the sweetly refreshing charms of apple.

At 4.5% alcohol, Ranga Blackcurrant & Apple Cider has an off dry finish and a tangy sweetness that comes from the use of real blackcurrant.