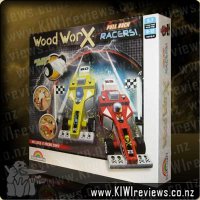 Made from strong, quality wood, Wood Worx kits are easy to assemble and finish - everything you need to produce an awesome result has been included in this kit.

Best of all, you'll have made it yourself! With so many cool design possibilities, the hardest thing will be which one to create. (That's why the kit contains enough for two complete cars.)

My seven year old boy got given one of these for his birthday from his grandmother . I helped him or really just guided him through the painting and building of this project , in my opinion the quality was very good the instructions were clear and easy to follow . We both enjoyed painting and building the cars, and the pull back motors worked very well . Value for money is ten out of ten as all this for under $20, it gives the kids a lot of enjoyment as the painting and building their own little race cars and can even add their own personal touch if desired . I would recommend one of these kits to any other young lads and will most certainly be purchasing more of these for future presents .

This Holdsons toy is fantastic - especially for boys! My 6 year old was very excited at the thought of building his own car. The fact there were enough parts for two racers in the box was even better. He generously suggested his 7 year old brother could do the other one (on the proviso that the 6 year old got first dibs on paint colours and stickers!)

It was simple enough to figure out which of the solid wood components went where. For a 6 year old it was definitely a 'do it together' project, though most of it he could take the lead in. Some bits were just fiddly to hold together for gluing. A 7-8 year old could do it alone (though I suspect the 'doing it together' is part of the fun anyway).

The instructions were okay, although not entirely clear (as we figured out when we'd glued the wheels as shown, only to find we had to pull one wheel off to attach the wheels to the car body!). Definitely glueing the axel and wheels together was the trickiest part because any glue over-runs could mean wheels that were stuck and wouldn't turn round.

The glue dried quickly (about 30-60 seconds) which meant there wasn't too much downtime before the next piece could be put on their car. We had a couple of pieces that came unstuck, but just re-glued and they were fine. We made this in two sittings (just because they wanted to start at night as soon as they opened the set), although you could easily do it all in one go. The boys were very enthusiastic to get back into building and painting it as soon as they could.

Although there didn't seem like much paint, in fact there was plenty to go round. The paint is good strong colours and stood out on the smooth wood. The selection of stickers was perfect, allowing for individualised Racers. My 6 year old was painting the drivers head black but left a section plain. When I questioned him he said,"that's where his face is, I've got a cool sticker to go on there. This black part is his helmet."

The pull-back motor to attach is really high quality and makes the racer go really fast (much better than similar plastic models we've bought ready-made in the past). It even maintains good speed on carpet!

The boys have had loads of fun racing their cars against each other. They thoroughly enjoyed the process of designing, building and decorating their cars. And both are VERY PROUD of their racers because, and I quote, "I made that car myself Mum!"

Gear up just like the mighty metal-clad warrior with this awesome Iron Man Helmet accessory! Press the button to activate your slow-release visor and make it slide into place so you're ready for action.

Activate your light-up eyes so your enemies can see you mean business and choose one of three different modes to head into battle. Press the Quick Missions button to hear the Iron Man character say cool movie phrases like "Target ... more...