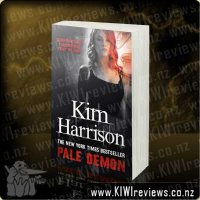 Condemned and shunned for black magic, Rachel Morgan has three days to get to the annual witches' conference and clear her name, or be trapped in the demonic ever-after . . . forever after.

But a witch, an elf, a living vampire, and a pixy in one car going across the country? Talk about a recipe for certain disaster, even without being the targets for assassination.

For after centuries of torment, a fearsome demon walks in the sunlight - freed at last to slay the innocent and devour their souls. But his ultimate goal is Rachel Morgan, and in the fight for survival that follows, even embracing her own demonic nature may not be enough to save her.

What can I say, but -SQUEEEEEEeee- ... another in the Rachel Morgan series, one of the very few "witch" stories that has the power to really grab me and draw me in. When I heard rumours that Black Magic Sanction was going to be the end of the series, I was mortified... it had a cliff-hanger ending! So I was jumping about like a loon when "Pale Demon" appeared in the request lists.

Continuing on, we are presented with Rachel preparing to attend the big Coven gathering to get a full pardon, her Shunning lifted, and be reinstated as a fully-acceptable member of the Witch community... or so she thinks. Nothing is ever that simple in Rachel's life - how could it be? She's a witch who can channel Demon magic, she's seriously annoyed both the Vampire and Were communities, and she's in a respect/despise relationship with an undercover Elf, who also happens to be a drug lord, and well respected businessman. Oh, and she lives and works with a Vampire and a Pixy. Yeah, real solid chance of a simple life indeed.

In this instalment, things get stepped up another notch, with the complications of "Destruction of a major National Monument", "Releasing an unspeakable evil imprisoned for thousands of years", "Discovering the true nature of Reality, and it's connections to the Everafter realm", oh and "Finding out you have seriously misjudged some of your allies, and enemies." Just another average week in Rachel's life.

This one had me on the edge of my seat, and grabbing for it every chance I could get... or make. After the last book killed off some key characters, it was nice to see a book where no-one I empathised with actually died... got sucked into a nightmare eternity, sure, but she deserved it.

It was also great to see Rachel discovering more about her true potential, her ultimate worth, and the strengthening of bonds between those she cares about, and who care about her.

Overall, SERIOUSLY hoping this isn't going to be the end of the series, though if pressed, I would have to say the ending of this one didn't leave the same sense of high anticipation I got from "Black Magic Sanction" - so it really wouldn't surprise me if this is the last I will read about Rachel Morgan, except perhaps in short-story collections and anthologies.

These ready-to-use full-colour cards and mats make it easy to get your word building centre up and running today! This resource also includes a variety of ideas for multiple ways to use the materials and reproducible activities to extend children's learning. Get children excited about reading and writing words with the ideas and activities in Build-A-Word.