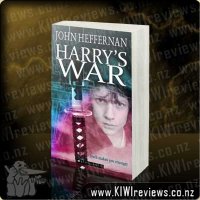 Grandpa talks about his war adventures all the time. And Harry loves listening.

His father was a soldier too, in a different war. But Harry never knew his dad, and his mother won't talk about him. In finding out why, Harry discovers a deeper truth, one that will change his life forever.

Some wars don't just happen on a battlefield...

Keeper of the Crystals 1: Eve and the Runaway Unicorn
Rating: 9.6

Everyone has a war to deal with, some of us on a more daily basis than others. My grandfather wouldn't tell me lot about his war days when it came to the fighting but he would tell me about the dancing, playing cards and writing home. He made it sound exciting and then there were the black and white photos that used to get hidden away.

Harry's war goes through the typical life of your nearly teenage boy who is excited by the story's his grandfather tells and documents then for later. Things get out of control though when Harry finds out that some of the stuff he believes isn't the truth. Harry fights to find out what the truth is and doesn't like it when he does.

I was emotional and a bit teary reading this book as it touched a nerve with me and reminded me about the day i found out my grandfather had died. This book is a must read for older children and adults alike and will stay pride of place on my book shelf with my grandfather beside.

I really don't want to loan this book out being so re-readable so i will be buying copies for others.

WOW! what an emotional and powerful read within the pages of Harry's War.

A young boy, captivated by the war stories his grandpa tells him, yet struggling to find the truth behind his own fathers death when he was just 3 yrs old.

Now around 11 yrs of age Harry is more convinced the story is mother told him, of his fathers passing, is not completely true. It just doesnt add up. What really happened to his dad? Why does everyone, his grandpa, mum and sister, automatically shut down when he tries to talk about his dad. He knows his dad was a loving caring father, he has proof of that in the small photo album he keeps in his room. Yet there seems to be a big secret surrounding his dad, and he needs to know what it is.

Harry's War, is an amazing story. We have all read war stories (both fiction and non fiction) before, but Harry's War is not just about wars with guns and battles and death. Its also about a young boy's struggle to accept that things just arent always as they seem, and his determination to find out the truth, no matter how hard it may be and who may get hurt in the process. And then there is grandpa...Harry's hero. Harry visits him daily, recording stories of when grandpa was at war. He idolises grandpa and loves being with him, but something is not quite right there either. His mum gets annoyed at him whenever he speaks of grandpa...why? He's just an old man with a lot of wonderful stories.

Without giving to much away, i highly recommend Harry's War to everyone. It is such an emotional story, that i even shed a tear whilst reading. The truth behind everything, the way the story unfolds, the heart break within the pages is so intense and real. There are so many things within the story that i can relate to. So many! And when Harry finds out what really did happen to his dad, you just wish you could be there to console him, especially if you have a personal connection yourself as i do.

An absolutely amazing story. So sad, and def one worth reading.

Marco never wanted to be an Animorph. He certainly did not want to be one of a handful of kids who are the planet's only defense against a secret alien army. He's worried about his dad - the only family Marco has left. If anything happens to him, his father will be alone. But something is ... more...