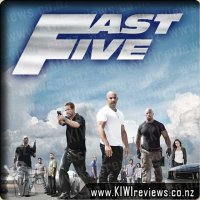 Former cop Brian O'Conner partners with ex-con Dom Toretto on the opposite side of the law. Since Brian and Mia Toretto broke Dom out of custody, they've blown across many borders to elude authorities. Now backed into a corner in Rio de Janeiro, they must pull one last job in order to gain their freedom.

As they assemble their elite team of top racers, the unlikely allies know their only shot of getting out for good means confronting the corrupt businessman who wants them dead. But he's not the only one on their tail. Hard-nosed federal agent Luke Hobbs never misses his target.

When he is assigned to track down Dom and Brian, he and his strike team launch an all-out assault to capture them. But as his men tear through Brazil, Hobbs learns he can't separate the good guys from the bad. Now, he must rely on his instincts to corner his prey... before someone else runs them down first.

Fast Five. This was the only theatrical film in the series to not have 'Furious' in the title, but it certainly did not lack intensity. The action starts straight up with an exciting jailbreak in the opening scene that sets the pace for the entire movie. With the addition of Dwayne 'The Rock' Johnson to the cast, the 'Fast' crew are suddenly facing a battle on multiple fronts with the addition of the United States Diplomatic Security Service (U.S. DSS) Agent Luke Hobbs (Dwayne Johnson) hunting them down. The addition of a professional military entity, adds a touch of realism to the movie, considering their Crew's previous antics.

Visually, I enjoyed the film. Set in the sun-soaked Brazil, a lot of the action occurs out in the open in day-time, which is a lot different to the predecessors that largely worked underground, or at night. It was a very fun movie, with some extreme action and stunts.

While in the end, the stunts being performed were clearly defying physics, they were still great fun to watch, and the twist at the end was expected, but how it was to happen was nothing short of brilliance. With currently, 5 sequels and 2 short films (Turbo-Charged Prelude and Los Bandoleros), it's easy to see why Fast and the Furious is Universal Studios biggest franchise.

I went in to see this movie with a certain degree of mistrust, but I was pleasantly surprised, the location is new and fresh. There is a mix of old characters from various movies who are all reunited by one plan....

There is plenty of action throughout the film and of course cars, cars, cars. This film went from a "I will see it as I haven't seen it before", to a "I must buy this movie to watch it over and over", I think it is the best fast and the furious movie to date.

The film also has the action plot and a softer plot running through the movie concurrently. I think this movie links back towards the original fast and the furious thread where family and unity are key to survival....

There's a scene about half an hour in to Justin Lin's Fast Five, the latest film in the car racing Fast & Furious franchise, where federal agent Luke Hobbs (Dwayne Johnson) angrily throws a clipboard to the floor as his explanation of something that "makes sense". It's this moment that totally sums up Fast Five: a film you can enjoy only by casting logic aside and simply surrendering to the bombastic absurdity you're witnessing. Luckily for those of us able to do this, the film is one of the best examples of big dumb action of the past decade.

This series seems to be on something of a one good/one bad streak, with the first, third, and this fifth film all being worthwhile, somewhat original examples of the big-budget summer blockbuster. Picking up directly where the fourth film (2009's Fast & Furious) left off, no time is wasted in getting to the action, and the opening bus assault places us in familiar territory, setting up the mostly unimportant plot with a spectacular, physics-(not to mention logic) defying stunt to get pulses racing. Where the film departs from the tried and true formula of its predecessors however is in blending the heist film genre with the vehicle-based action, and the decision to shake things up was a smart one. The biggest problem with the previous film was that it just seemed kind of pointless, but here Lin uses the 'one last job' team heist plot as an excuse to reunite characters from every previous entry in the franchise, and indeed the film feels like it belongs more to the Ocean's Eleven canon than Fast & Furious. The series' celebrated 'car porn' is still present, yet Lin wisely opts for more variety than ever before, including more direct character conflict (fighting!), and thrilling parkour-esque foot chases across the rooftops of Rio de Janeiro.

While it is fun to see so many previous cast members returning to form the team (similarities with 2010's Inception abound here), undoubtedly the greatest part of Fast Five is the introduction of Dwayne 'The Rock' Johnson as Agent Hobbs, a kind of 'super-cop' sent in to nab only the most wanted criminals. Johnson, looking so absurdly massive that he dwarfs even Vin Diesel, adds an extra layer of beefcake to a film already dripping with testosterone, and he seems to be loving every minute. Throwing out hilariously macho one liners ("Gimme the damn veges!") in between breaking necks and jumping out of windows, he fits so perfectly into the film that every time he wasn't on screen I found myself just waiting for him to come back. Perhaps my biggest complaint is that he should have had more screen time, but in a film already juggling around a dozen characters, you can't always get what you want. There's always the inevitable sixth entry into the franchise, where hopefully Agent Hobbs will play more of a role.

Certainly Fast Five shines in the action scenes, but things aren't so successful if one foolishly tries to think about the logic of the narrative. While it's an interesting move to have Brian (Paul Walker) turning away from his FBI career to help his friend Dom (Diesel), it's hard to see these characters as heroic in any sense. Their desperate self-preservation antics betray a shockingly callous disregard for any innocent bystanders. One would do better to not think about the number of fatalities in the various scenes of destruction around Rio, and even Agent Hobbs and his team, the most obvious 'good-guys', brutally kill their fair share of people. The film attempts to portray all of the people killed as stereotypical corrupt cops and officials, but I did find the amount of violence from the supposed 'heroes' of the film a little distressing. Add to that around 30 minutes of planning for the climactic heist that ultimately becomes unnecessary after a plot twist that changes the whole plan, and the problems with Fast Five's script start to show their presence. But obviously this series was never intended to be admired for its storytelling, and any concerns about the plot are chased away by the excellent action sequences.

With Fast Five, Justin Lin has arguably crafted the finest film yet in the franchise. Everyone involved seems to know what this movie needed to be, from the stunning use of practical effects that more than makes up for the awful CGI of the previous film, to the way the ensemble of past characters really pushes the series' constant theme of doing everything for your friends and family. Undoubtedly we will see these characters again, and there is potential for maybe one more outing to round off the story of Dom and Brian. Hopefully Fast Six or whatever silly thing it is eventually titled will match the quality of this entry.