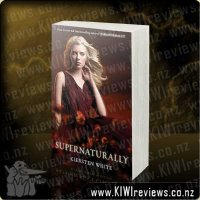 It's been six months since Evie fled the International Paranormal Containment Agency with her shapeshifter boyfriend, Lend, and she finally has the normal life she's always dreamed of.

But when her faerie ex-boyfriend shows up hinting of a battle brewing between the faerie courts over Evie herself, she realises that she hasn't left her not-so-normal past far enough behind...

I had extremely high hopes for this book after having been totally immersed for the few hours it took for me to completely devour the action packed, fast paced, enthralling "Paranormalcy", the first book of Kiersten White's new series about Evie, the supposedly "normal" human who can see through all supernaturals "glamour" to their true self and who uses that skill to help out the IPCA (International Paranormal Containment Agency). Surely the sequel would be more of the same, if not even better? While it was still pretty fast paced, and certainly had a reasonable amount of action, unfortunately this book lacks the edge and "grip factor" that the first book had. While in Paranormalcy, the characters either in lead roles or sub-lead roles (Evie, Lend, Raquel, Reth, and Vivian) were strong, feisty, interesting, and confident people, in the sequel they all seem to have turned sappy, drab, and... well... normal. I know in this book, Evie is struggling to deal with who/what she is and find her place in the world while trying to find something resembling a "NORMAL" life, but by doing this, unfortunately, the author has turned this from a series that was fresh and had fantastic potential to be something rather different, into something that is just another teenage book filled with relationship issues, rebellion, and typical high school-type dramas all wrapped up in a supernatural filled world. Even the supernatural element was rather mild in comparison to book 1!

In many ways, "Supernaturally" is rather predictable and repetitive, especially with Evie's favourite habit of replacing swear words with "bleep"... an inside joke between Evie and her best friend, Lish, a Mermaid, that was explained in Book 1, but was way over used in book 2. She even seems to be bagging-and-tagging the same types of paranormals all the time, despite there being so many other types showing up in the books. This was rather disappointing as the author had so much potential and room to really have some fun with this plot, but seems to have lost that X factor and just let it kind of fizzle out. I am seriously hoping she writes a 3rd book (there's a few things left hanging, questions unanswered etc, that could certainly lead to another book) and brings back the sassy edged X factor again.

Summary: Book 1 definitely worth reading, Book 2 good for answering questions raised in #1 and it introduces the rather interesting Jack, but that's about it. Fingers crossed for Book 3!

Score: 9.8
Product reviews for listing 1487: The Bridei Chronicles #3 - The Well Of Shades -  Written by Juliet Marillier

Sent home to Ireland on a secret mission for King Bridei of Fortriu, Faolan must first deliver the news of a brave warrior's death. But Bridei's chief assassin and spy also finds himself facing the demons of his family's dark past, with wholly unexpected results. By the time he tracks down the powerful Christian cleric who may be a threat to the stability of Bridei's pagan kingdom, Faolan has become responsible for a child, a dog and Eile, a ... more...