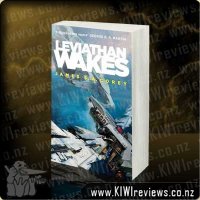 Humanity has colonized the planets - interstellar travel is still beyond our reach, but the solar system has become a dense network of colonies. But there are tensions - the mineral-rich outer planets resent their dependence on Earth and Mars and the political and military clout they wield over the Belt and beyond.

Now, when Captain Jim Holden's ice miner stumbles across a derelict, abandoned ship, he uncovers a secret that threatens to throw the entire system into war. Attacked by a stealth ship, Holden must find a way to uncover the motives behind the attack, stop a war and find the truth behind a vast conspiracy that threatens the entire human race.

There are some things in life I really don't enjoy contemplating - and being eaten alive by alien goo has to rank right up with the best (or worst) of them. The Aliens movie gave me the screaming heebee jeebees in my youth and frankly I have never really outgrown the disgust at the thought of something even slightly sentient using me as an incubator and/or food source. So this book, while totally enjoyable as a sci-fi story, had me rather disturbed on a a deeper level... and I think that just added to why I loved reading it - it thrilled me, it excited me, it never bored me... because deep down it never stopped horrifying me.

The characters you will encounter first are good people, trying to make the best of a really crappy situation called 'living inside a ball of rock in the middle of space, one breathe away from vacuum death'... and by the end of it you have met the other end of the spectrum - those for whom the death of the entire human race is but a stepping stone to something that could make them nearly gods, and but for the insight and moral strength of one man, they would get away with it.

I loved the two main characters, and how they teamed up to make a real respect/loath relationship that none the less drove the entire plot. One, a rock cop, with the streetwise nature and a strong but variable moral compass that allow him to survive in the streets of a city inside a rock drifting in deep space... and the other a starship Ex-O with all the drive and moral certainty, but with such an all-encompassing nativity that leaves him with no concept of how the human world really works who's ethical standpoint puts him fair square in the sights of every sniper of the human race.

This story really does take you outside of the world as we know it, and right into the heart of how the world works underneath all the smiles and handshakes we see on the news when powerful people meet. Sure, it's set in the future, in space, and with some strange alien goo as the Holy Grail they all want to deal with... but in truth it's not hard to see this is also the story of Earth as it stands today. Replace 'Clean Water' or 'Oil' as the goal, and you can easily imagine somewhere there is a crowd working furiously behind the scenes to make sure they are the one, the only, powerbroker in the deal of the century to come.

Overall, a gripping opening salvo by Corey, and I look forward to seeing what happens with the entities once known as Julie Mao and Jo Miller. Two mile high crystal towers and the ability to ignore the laws of physic make for some very interesting opening gambits to the next book...

Emily, Trellis, and Vigo visit Algos Island, where they can access and enter lost memories. They're hoping to uncover the events of Trellis's mysterious childhood -- knowledge they can use against the Elf King. What they discover is a dark secret that changes everything. Meanwhile, the Voice of Emily's Amulet is getting stronger, and threatens to overtake her completely.