« Super Diaper Baby 2 - The Invasion of the Potty Snatchers review 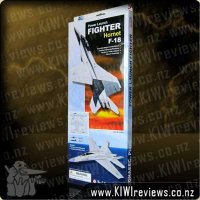 First things first - this product is made in China... and as we have discovered with such things, the instruction sheet is, at best, a moderately-good translation into American English... and at worst a travesty of linguistic misinterpretation. Thankfully, this case was at the better end of the scale, with plenty of pictures and few words, meaning less to translate the badly English into.

Putting the plane together was simplicity itself, after a bit of careful observation of the diagrams and some thoughtful planning... sliding in the rearmost plastic wing locator bracket being the toughest part of it as far as I determined. Careful use of a craft knife to cut away some of the stickering on the fuselage (plane's main body) helped deal with the problem of it tearing and bunching up, preventing the bracket from fully seating.

The fuselage is made of sturdy balsa - a heavier grade than I have seen in most hobby planes - covered with a large sticker on each side for cosmetics. It also comes with a rubber nose cone pre-attached, which provides the nose-heavy weight required to keep the plane's center of mass ahead of it's center of rotation - which ensures it flies straight. (See, you CAN learn serious stuff by watching MythBusters!) The wing, tailfins and rear stabiliser are all foam sandwiched between stickers. This kept the lift surfaces as light as possible, but with enough strength to not warp under the stresses of flight.

I thought it was very clever how, once assembled, the plane comes with printed stickers to help attach the pieces more securely, and smooth over mounting brackets to give better airflow. This is a little detail I think is missing from most of the 'cheap and nasty' toy planes we see in Dollar Shops and the bargain bins at bookstores. This may appear to be like those planes, but it sure doesn't look like it when you pop the box open and get 'hands on'.

Flight testing was a bit of a problem, since the inside was too small, and the outside was quite wet... but I managed to get a dry spell long enough to send it careening down the driveway in "hand-thrown glider' mode. The 'rubber-band power-launched' option also worked, but we couldn't really give it much grunt, as the end of the driveway leads out on to a main road, and the last thing I wanted was to have a truck or car crash trying to avoid 'bird-strike'.

A few quick test flights, some tweaking of the ailerons and flaps to make it fly straight, and it was zooming down the driveway as happy as a sparrow. I think I will need to take this out to our Test Range down by Hamilton Lake (Lake Rotoroa) sometime when it's not so boggy, and give it a proper test where it has room to soar, because honestly, a bird as fine as this should not have it's wings clipped to a driveway run.

Overall, this is a great toy, and will be a knock-em-dead winner for Christmas. The kids might take one look and groan, but after assembly and some play-testing, those frowns will be ear-to-ear grins, and the inventive tykes will undoubtedly have come up with some kind of tag or catch game. Watch for them in stores!

FOLLOW-UP : 28th July 2011
Finally got a chance to take this out to the testing range and give it a good test under rubber band launch conditions. When you are applying more thrust, even the slightest change in airflow can cause erratic flight or even crashes... in the course of trying to get long, level flights I saw all of these... and you know what, they were HEAPS more fun and interesting to watch than a slow, straight glide.

In the end, I adjusted the plane for "Stunt Mode" flight - with all the flaps off at carefully calculated angles design to send the plane looping, spinning, rolling, and generally insanely careering around the park... often resulting in wading across muddy patches of paddock to reclaim the plain which was proudly stuck nose-deep-bum-up in a soggy patch of grass. But how it got there was ALWAYS exciting to watch. I had a family stop in the middle of their afternoon stroll around the lakefront while the kids put on a background soundtrack of "Oooohhh" and "Aaaahhhhhh" and "Wooowwwwwwww!" for me.

Afterwards, as I was heading back to the car to have some more fun with the Power Wave speedboat before heading back to write this all up, a couple of adults who had been observing came over and had a good look at the plane and boat, asked me a lot of questions, and departed with comments such as "Going to keep an eye out for that... think the boys would like one each?" and "Well, it's a good time to be thinking about Christmas presents before things go crazy, shall we check out the toy store in the morning dear?" - always gratifying to hear.