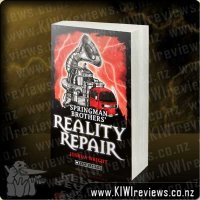 Queen's Port has become a full-blown fantasy freak-out! Somehow Jim Springman must rescue his sister from her own imagination and return his hometown to normal.

But it won't be easy when monsters want to eat him, bikers want to clobber him, and the local necromancer wants him back in school!

His friends, Ruthie and Josie, just keep dragging him in deeper... Good thing there's a fix for even the freakiest of evils - Springman Brothers' Reality Repair!

Jim Springman and the Realm of Glory
Rating: 9.5

Trouble and the Missing Cat

I have got to say, this book was a lot better than the last one. I liked the cover, the picture of the machine called the "Reality Conductor" gave me a better idea of what it looked like, and that formed a better picture in my head while I was reading. When I first laid eyes upon this book, I was sort of excited about there being a sequel to "Jim Springman and the Realm of Glory", and I was really hoping that this book would have a lot more action and excitement than the first one.

There was loads more action in the storyline, and there were also brand new characters, which made it even more exciting. There were no bad parts, the whole story was 100% A-OK, HUGE thumbs up for that! I was awed by the thought of magic food, like "Instant Banquet" which was a powder which could become different types of food, a Cow whose udders could produce milk, cream and cheese, plus there was a pie that kept re-growing when part of it is taken off, all that stuff made my mouth water, so that is probably my favourite part.

I hope that there is going to be a third book, for this one ended with the town, Queen's Port, still being the realm of glory, and when that sort of thing happens, a sequel comes out a few years/months along the track. It was cool when a Giant egg that Jim Springman's brother, the seemingly mad scientist Fletcher, was given as payment for one of the "Reality Repairs" hatched into a Cockatrice, half reptile and half rooster, I'm really into mythical creatures and monsters.

Overall, this book was rather good; I think that it is for kids 10+ since it has some slightly unpleasant parts, but this is most definitely a book worth reading. For only $19.50 it is reasonably cheap. So try this book, it will be a blast!

This 7 CD set tells the first sensational tale of Harry Potter, the finest and most famous of wizards. This wonderful story is narrated by Stephen Fry.

There was a shower of shooting stars when Harry Potter was born - weathermen all over our world of Muggles were amazed. But in the other world, the Ministry of Magic wasn t surprised at all, for Harry Potter was to be one of its finest and most famous wizards. Brought by flying ... more...