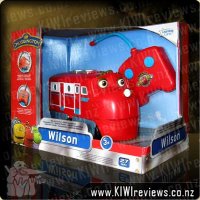 Let's ride the rails with this chunky remote control Wilson. Featuring forward and reverse turn functions, an easy to use remote control and push along and RC functions.

Wilson is a lively multi-function engine with oodles of enthusiasm. Of course this eagerness isn't always matched by his ability to pay attention to instructions, so he often finds himself in deep water.

Having a hyperactive 3yr old can make it difficult on wet days. All he wants to do is go outside and find every inventive way to fall over, get muddy, catch a cold, scratch himself on something rusty, fall in the drainage ditch, or otherwise burn off as much steam as possible in the messiest, most dangerous (aka FUN) way he can think of. However, I think in this we found our secret weapon.

His love of all things train related, ESPECIALLY Thomas the Tank Engine and Chuggington borders on obsessive... so a real-live interactive train, and one of his favourite characters to boot, well... it was like sugar-water to bees. I managed to catch a photo of him mid-cavort as he squirmed around laughing his little head off, while making poor Wilson careen around the room crashing into everything he could find. Chairs, TV stand, bookcases, other toys... nothing was safe from the Rampage Off Rails.

So simple to drive even a... well, 3 year old, could drive it, this is very suitable for kids of ages 2-6 I think... above that age and they would probably like something a little more flexible to drive... but for the tots, 'forwards' and 'turn left' are all you need. Want to turn right? Do a 3/4 turn left instead. (How very "Derek Zoolander"! OMG, did I just say that?! -shudder-) It took all of 2 minutes for my little conductor to go from random crashing to fully-aimed and designated target destruction... in fact after this shot was taken we started to build up towers of wooden blocks for him to smash down with incredible - and somewhat worrying - accuracy and skill.

Overall, a great toy! I would like to see more characters from the series in this style, especially some of the more eccentric ones, like Old Pete. (Yes, I have absorbed some of the show due to REPEATED REPLAYS of the DVDs. -sigh- )

Defend the planet - or your little brother! - against unfriendly foes with this air-powered dart blaster!
The latest in Stark Industries defensive technology, the N.R.F. 425 blaster rapid-fires a full magazine of 10 repulsor darts.
Send darts soaring at targets up to 30 feet away! Designed for defensive operations under any conditions, the N.R.F. 425 is the last word in repulsor technology.
Re-live the ... more...