ProdID: 2977 - Season of the Witch
Directed by Dominic Sena 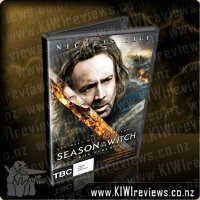 Season of the Witch product reviews

Nicolas Cage and Ron Pearlman star in this supernatural, action adventure about a heroic Crusader and his closest friend, who return home after decades of fierce fighting, only to find their world destroyed by plague.

The church elders, convinced that a girl accused of being a witch is responsible for the devastation, command the two to transport the strange girl to a remote monastery where monks will perform an ancient ritual to rid the land of her curse.

They embark on a harrowing, action-filled journey that will test their strength and courage as they discover the girl's dark secret and find themselves battling a terrifyingly powerful force that will determine the fate of the world.

I have watched many Nicolas Cage's movie before and I would say he acts the same to each movie, to me it's like it's a bit slow. I don't know, I'm a fan but his acting seems to be predictable now.

I like fantasy movie and this one is I would say just Ok. It has a very engaging start but as the story goes, it gets boring and I feel like I can tell what's going to happen next and my guesses are correct. I say boring because I expect this movie to have action fights between the good and the bad as the title says Season of the Witch, which the movie only have one witch and it ended as not to be a witch but the devil.

So I would say the title doesn't match what the story seems to claim. It was just what the church thought about the woman who's displaying odd behavior and the church associated the plague to her. I believe the story could be more exciting if there were more than one villain. There were only a few heights of the movie which I could count on fingers, so I'm glad I didn't bother to watch this on big screen.

The title was exciting and the actors have big names but the story didn't live up to my expectations. And I don't like what happened in the end as the main characters died and for me it's not a happy ending.

I'm never too sure about Nicholas Cage. I like some of his roles, but he seems to have a tendency to act the same in all his roles, which doesn't help a movie in anyway and adds to the boredom.

We hired this movie on special, so only paid $1 to watch it, and I'm glad that was the height of our spending when it came to this movie.

There was nothing that I didn't expect. It seemed like it kept trying to make you believe something that wasn't, but it was done so poorly that you didn't even fall for it by a long long loooooong shot.

I like Ron Perlman, I always enjoy his movies, but this one did him no justice at all and I could only find his character (all the characters in this movie in fact) annoying.

I doubt that I will ever watch this again, my husband might, but if he did it would probably be at night, when in bed, so I can just roll over and fall asleep, which is what I feel like doing just talking about this movie.

Having originally been put off Nicolas Cage by his role in 'Snake Eyes' many years ago, it has been a long road back to acceptance for him in my eyes. His role in 'Next' did him great credit, despite the sad performance in 'Lord of War'. This wasn't one of his best... but it certainly wasn't his worst performance... though in this he was falling into the Keanu Reeves trap of being an actor playing an actor playing a role... (Oh c'mon... you can't tell me you haven't noticed Keanu is always Keanu?!)

In this movie, Nicolas is a Knight of the Crusades, deserter and renegade, along with his partner in battle played by Ron Perlman... and there is basically NO real action. Personally, I would have classified this more as a 'fantasy drama' than anything else.

This isn't a BAD movie... but it's just missing so much -oomph- where there was potential for it to be much, much more engaging, entertaining and exciting... I mean, witches, Knights, swords, paranormal... all set in the middle of the Black Plague... how could they have managed to take this promise of 'spicy salsa taco' and turn it into 'baked beans on toast, with some cheese'?!

Overall... you would really have to be into the psychological dramas to find this engrossing, but for a bit of light TV late at night without the worry of bad dreams afterwards, it has it's place... it's a generic chewing gum in a high-brand wrapper of a movie, but you know, there are those who will find this great viewing... but more who will be glad they rented it instead of bought it.

When Marmaduke (Wilson) moves to a new neighbourhood with his family, the super-sized teenage dog soon discovers he just doesn't fit in - literally! But, with the help of his best pal Carlos the Cat (Lopez) and some newfound four-legged friends, Marmaduke may ... more...