There Was An Old Woman Who Swallowed A Weta review 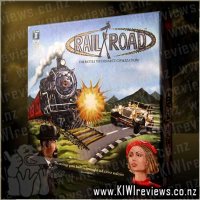 A long time ago, in a land far, far away, two great entrepreneurs set out to connect the world.

One chose to build the world's most connected railway system. He believed that rail offered the superior way to connect far-flung societies. The other believed that roads were the way to create connectivity between societies, and wanted to connect the world by road. Both were headstrong, resourceful and highly intelligent.

Rail/Road is the battle between these brilliant entrepreneurs. With the good of civilization at heart, they embarked on a healthy but adversarial mission to build connectivity.

Both want to be crowned the greatest entrepreneur of all time - but only one will succeed! Who will prevail... the road maker or the railway system builder? You decide!

Pick a side... use your foresight and intelligence in a rapid game of strategy to win.

This is a game that would appeal to people who like Blokus. A two player game, you play as either Rail or Road as you compete to form a transport network by placing your pieces on the board. Each tile has a number of potential junctions coming off it allowing you to grow your network, encircle your opposition, and generally prove the dominance of your network.

After a quick scan of the rules we settled down to play our first game. We played this in "friendly" mode as we got our heads around what we were doing. Unfortunately we didn't quite understand the rules 100% the first time round (largely because it was me reading the rules and not the better half) and the game seemed fun but rather pedestrian. Upon completion we re-read the rules (or the better half did) and we picked out some of the things that we had done wrong. Then it was game on for the second round, the gloves came off and the game descended in to a bitter battle of one-up-manship, unsportsmanlike moves, and general underhanded tactics. It was about this point I fell in love with the game.

RailRoad is a strategy game that will have you trying to outwit your opponent as you attempt to stay three moves ahead. Once we understood what we were doing, it was a heck of a lot of fun to play and a game to be kept aside for nights where there is nothing on TV.

Oh boy this game could break up marriages and other long standing relationships! This is the sort of game that really requires you to plot, plan and think ahead. A few underhanded and brutal moves don't hurt either.

The aim sounds pretty simple, one player using road pieces to build and the other player using railway pieces. Each tile has a differing value depending on how many connections there are ie: a tile may have 2 - 4 different branching roads/tracks. The idea is that at the end of the game, the winner is the person with the lowest number of connections over all unplaced tiles.

A couple of key points to that I've found useful so far, remember that you don't have to join to your own pieces. You can join a track to a road so long as there is a continuous connection. This can be useful for blocking an opponent. In addition if you can create a continuous road or track from one side of the board to a neighbouring side (not opposite!) then it creates a exclusive zone for yourself that the other player cannot place in and it captures any of their pieces already there, increasing their final total.

I also found it a good idea to use up any of the higher value pieces sooner rather than later, so anything with four or more connections on it I used early on.

I love strategy games so this was right up my ally. First time around we did play it pretty nicely and all that but the second time around, once we knew what we were doing, we didn't hold back and were pretty ruthless. We weren't shy about blocking each other and cutting each other off. It made for a very close game! We found we had to think fast, plan ahead and it paid to have several play options on the go in case the other player blocked us.

As this is a two player, it also appeals to us as it's perfect for the games cupboard. We do have where we want to geek out and turn off the TV but it can be hard finding a decent game that is challenging and fun with only 2 players. This one really fit the bill and is one we will add to our stash. A+ from hubby and I!

A Journey of Digestion from Food to Flush!

Snacks and Bladders is a wonderful exploration of the human body and the food we eat to fuel it. Correctly identify body parts and make wise food choices to stay ahead of your opponents as you travel through the digestive system. An entertaining way to learn about this facinating subject.