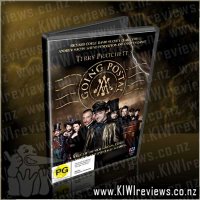 Our hero, the charming but condemned arch-swindler Moist von Lipwig found himself with a noose around his neck and dropping through a trapdoor into... a government job? By all rights, Moist should be meeting his maker rather than being offered a position as Postmaster by Lord Vetinari, supreme ruler of Ankh-Morpork.

Getting the moribund Postal Service up and running again, however, may prove an impossible task, what with literally mountains of decades-old undelivered mail clogging every nook and cranny of the broken-down post office. Worse still, Moist could swear the mail is talking to him.

An adventure story filled with romance and revenge.

What a hoot! Though I have always enjoyed the Discworld books, the movie live-action adaptations have always been more than a little 'flat' to me, especially "The Colour of Magic" - despite an all-star cast. This one, however, really rocked me back on my heels laughing.

With David Suchet - always memorable as Agatha Christie's 'Poirot' - playing the 'bad guy' Reacher Gilt, and Claire Foy playing Adora Bell, there were two instantly familiar faces perfectly placed in their roles. Add to that Richard Coyle playing Moist von Lipwig - our 'hero' if you will (despite having a rather chequered past to say the least), the story unfolded beautifully, if not entirely loyal to the original manuscript as penned by Terry Pratchett. No surprises there - you simply can't cram a book into a movie format and have it match exactly.

The only slight disappointment I found was Charles Dance as Lord Vetinari... though he had the right manner and tone, one of Vetinari's main distinguishing features was jet black hair slicked back, and a midnight goatee that came down to a point... and on both of these counts the make-up department blundered off the track totally. Still, it was a small thing that didn't detract from an excellent performance, and will only matter to the die-hards... like me.

Overall, a most excellent way to spend 3 hours of a cold, rainy day. Though it is flagged as PG, I didn't see anything in there that my kids haven't seen worse versions of on the nightly news, so I would be comfortable saying that this movie is a family-safe one, well suited for a clan gathering, on the couch, under a couple of thick blankets, with drinks and biscuits in hand.

Hey Presto! Hold on to your magic hats and get ready for some magical fun!

Hi-5 wave their wizardy wands and scatter their fairy dust to create a world of Hi-5 fun! From magical creatures on daring adventures to a trip on the Dancing Bus, say the magic words and join a fantastical trip with Hi-5 Hey Presto!