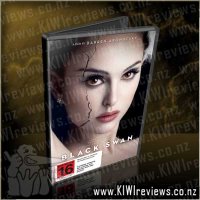 A psychological thriller set in the world of New York City ballet, Black Swan stars Natalie Portman as Nina, a featured dancer who finds herself locked in a web of competitive intrigue with a new rival at the company (Mila Kunis).

A Fox Searchlight Pictures release by visionary director Darren Aronofsky (The Wrestler), Black Swan takes a thrilling and at times terrifying journey through the psyche of a young ballerina whose starring role as the Swan Queen turns out to be a part for which she becomes frighteningly perfect.

Black Swan follows the story of Nina (Portman), a ballerina in a New York City ballet company whose life, like all those in her profession, is completely consumed with dance. She lives with her retired ballerina mother Erica (Barbara Hershey) who zealously supports her daughter's professional ambition.

When artistic director Thomas Leroy (Vincent Cassel) decides to replace prima ballerina Beth Macintyre (Winona Ryder) for the opening production of their new season, 'Swan Lake', Nina is his first choice. But Nina has competition: a new dancer, Lily (Kunis), who impresses Leroy as well. 'Swan Lake' requires a dancer who can play both the White Swan with innocence and grace, and the Black Swan, who represents guile and sensuality.

Nina fits the White Swan role perfectly but Lily is the personification of the Black Swan. As the two young dancers expand their rivalry into a twisted friendship, Nina begins to get more in touch with her dark side with a recklessness that threatens to destroy her.

I do enjoy movies with a psychological spin to the plot, but Black Swan was too slow to use it effectively. Natalie Portman plays 'Nina', a ballerina who shows perfect technique, but is seen to lack the passion, grace and dexterity that is needed for the lead role in the ballet act. With the pressures of the ballet director, and from her overbearing mother who is constantly pushing her, Nina is slowly pushed into madness as she tries everything to become that is asked of her.

Although widely well received, I found it largely irritated me, with the constant conflict between the mother and daughter, becoming annoying and grating. Mila Kunis, who played 'Lily' was far more interesting to watch, and soothed out a lot of areas of conflict in the movie for me. As the movie came to an end, it became inevitably confusing as to what was occurring, with Nina becoming increasingly unstable, and in the end causing harm to herself instead of others.

Whilst the ending was well done, the entire movie coming up to that point did little for me, and I assume the writers were aware it was quite thin in places, and decided to write in a 'lesbian scene' between Nina and Lily.

It does provide a strong message with regards to the overwhelming pressures that modern ballet dancers are placed under in the plight of becoming "perfect". But beyond the social commentary, it failed to impress me until the last moments.

First off, I have no idea what I was walking into when I went on a "date night" movie mission. And turns out I was pleasantly surprised - both from a male and female viewpoint. I can absolutely see why this was touted as the film of the year for 2010. Natalie Portman alone was OUTSTANDING and completely believable (in so much of this complex storyline is believable). Costumes and design, as well as staging, was also fantastic.

I have heard it described as "Graceful, brutal, beautiful and horrific" and certainty those words sum is up perfectly. A strong 4 star (out of 5) rating for me, and possible more given the number of hours I've been thinking about it.

I'm not sure I should write this after only one viewing because honestly this film deserves at least two!

First and foremost this is not a dancing movie. Yes you do get to see some dancing but it is not the focus of the film. Instead this is a deeply dark and twisted journey into the mind of an already unstable ballerina on the verge of becoming a star.

I have a whole new respect for the acting skills of Natalie Portman. Her 2011 Oscar win was well deserved. Her performance was chilling and stunning to watch. I could really believe it as her character descended from innocence to depravity.

This is not a film for mindless viewing, the tight running time means that the storyline is fast paced but incredibly rich in symbolism with layers of interruption. The script was incredibly well written and at times I almost found it jarring. Safe to say it earned it's R16 rating. I admit that yes in some ways you could see where the movie was going but other twists and turns may leave you having missed them completely. That why this is worth at least two viewings!

The only thing that left me disappointed was that there were no special features at all. Guess I'll be crossing my fingers for a special edition or 2 disc special. Surely a movie of this calibre would warrant it!

If you love psychological thrillers then this really is a movie I would recommend. I can guarantee that it won't easily leave you and you'll spend quiet some time trying to unravel what you've seen.

Score: 4.4
Product reviews for listing 571: The Hitchhiker's Guide to the Galaxy -  Directed by Garth Jennings

Everyone has bad mornings. You wake up late, you stub your toe, you burn the toast...but for a man named Arthur Dent, this goes far beyond a bad day. When he learns that a friend of his is actually an alien with advanced knowledge of Earth's impending destruction, he is transported off the Earth seconds before it is exploded to make way for a new ... more...