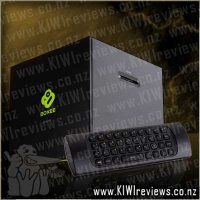 Ever wish you could get all the great free entertainment from the Internet onto your TV? Or playback your personal collection of movies, TV shows, music, and photos in your living room without having to sacrifice your laptop? Ever wish you could enjoy and share that movie, TV show, or YouTube clip with your friends on Facebook and Twitter with the push of a button on your remote, from the couch?

All of this power and more is coming in a killer new box from D-Link & Boxee.

In a situation which reminded me of the recent ClickFree C3 fiasco, my first impressions were somewhat muted, to say the least. No matter what I tried, I couldn't get this 'darling little black box' to hook into the wireless network and do whatever it was it needed to do... so, taking a lesson learned from prior experience, I hooked it into the wired network... BIG difference!

A rather quick firmware update, and the interface went from -urg- to -wow-... and by digging around in the settings menu, I discovered that the MAC address clearly stated on the packaging and the unit itself was in fact the wrong one for the wireless... and once the wireless adaptor's MAC address was entered into the security filter on the wireless access point, suddenly all things were possible and access was restored! I think they should have taken a leaf from Microsoft's slimline XBox 360, and had a system in place whereby if the box detects a cabled connection, ONLY the wired adaptor is activated, or if a wireless network is detected and there's no cable plugged in, only the wireless adaptor is activated... and whichever card is active is the one with the one-and-only MAC address... this means TOTAL simplicity for the end user!

Yeah, OK... maybe a bit 'geeky' for the average Kiwi consumer, but worth mentioning for the geeks and advanced home-theatre buffs.

Right, back to the important stuff... Despite it's awkward appearance, the Boxee Box from D-Link has it's fair share of ups and downs.

The remote, though amazingly clever and fully-featured due to it's intelligent use of BOTH sides, has a fatal flaw: it uses both sides. Why is this such a bad thing? Well, the biggest problem is that by keeping one side clean and well spaced out, they have managed to put active buttons right where your fingers sit when you are trying to use the keyboard side to type... this means that you are likely - at least in the early days of use - to hit one of the buttons causing unwanted and unexpected side effects... which inevitably lead to screaming, frustration and possibly the remote getting repeated flying lessons. Could this be the killer? No... well, possibly not.

Is there a solution? Not as far as the user is concerned... but you know, a simple little device inside the remote would have solved all the issues. Imagine a small plastic tube, with two little contacts at each end, and a metal ball inside that can roll free. When the remote is one way up, the ball closes one set of contacts, allowing only one set of controls to be active at a time. Problem solved - MacGyver, you're a genius.

The operating environment (once full updating is completed) seems quite happy to follow the trend first set by Sony's PS2 games console - that of 'all content floats in antigravity space'. Though now somewhat cliched, I still like the look and feel of this theme... it's intuitive, easy to navigate, and aesthetically pleasing to look at... plus if you ever decide to hook a Kinect sensor to it, it will still work just as easily... maybe even better! (See -this link- for full details.) I was even impressed at how quickly it generated/downloaded data and thumbnails for all media it discovered as it wandered around the open sections of our office network.

Despite much discussion, investigation, testing and outright head-scratching, I still doubt the need for the SD media card reader in the box... sure, you can slap your camera card in there and look at the holiday snaps on your big screen... unless of course you like to shoot in one of the many RAW modes today's DSLRs use... but if all you have is a dinky point'n'shoot that only does JPEG files, then chances are you can hook it direct to your TV anyway and this is a redundancy... So, though I can't see any reason NOT to have it there other than maybe dragging the price down $20 or so... I can't honestly call this a 'hot feature' and keep a straight face. Perhaps if it had been SD/SDHC/SDXC compatible it would have impressed me more.

Something I would have liked to have seen, and was sad not to... a third, pretty yellow RCA output plug... for Video signal. It would have been good to have been able to utilise my bigger-but-not-HDMI-compliant TV. I can't imagine those with the older video-wall-sized plasma and LCD TVs that don't carry HDMI ports will be pleased to discover that the next big hitter in streamed media devices won't support them. Sure, trying to ram Hi-Def TV down an RCA cable is stupid... but if this box is so smart, I am sure it could find a way to simply downsample the images, or flat-out deny access to too-high media, while still allowing the owner the option of accessing all the lo-def files they already have, or obtain in future.

Does this all sound very negative? Perhaps... but what do I think of it in a more general sense? That's easy... I flippin' well LOVE it. Once the hurdles are over and the blood pressure has dropped back to sub-magma levels, this little beastie is one of the easiest, most pleasant-to-use devices I have come across in a long while. Not plug-n-play by any stretch (so don't trust the manual - as usual, it's basically destined for the recycling bin within moments of you picking it up), but still not some "Bridge of the USS Enterprise" wannabe either. It was very clever about identifying all the media it found, and where it got confused (eg. 01 - Alien.avi was detected as some cornball 80's sci-fi flick "Dr. Alien") it was amazingly simple to fix, with all the tools just a few key-presses away.

Overall, I would like to see the price come down a bit, to make it more affordable, but being *very* early days for the Boxee Box in NZ I doubt we'll see that happen too soon. I think once it gets below $350.00 it will be a seriously smart consideration for any home. Stick it on top of your DVD/BluRay player, and you can chuck out FreeView and Sky... I haven't watch regular TV since I started testing the Boxee, and don't miss it one bit!

S-Video cables use advanced engineering methods and the highest quality materials to isolate your signal from interference to deliver the purist video signal available. Ordinary video cables, such as those that come with your video devices, sacrifice performance by using lower grade materials , including steel or low-purity copper conductors. This ... more...