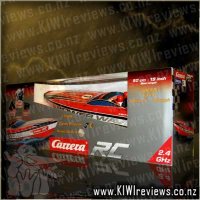 Drive and operation is digitally proportional and the concept satisfies typical 'Ready to Run!' expectations. The ergonomic control set offers a full range of control options for this 50cm long RC model and is perfect for left and right-handers.

Very important: The range control ensures the boat automatically re-enters the control range when it reaches the edge of the transmitter range. Another essential part of the boat's exemplary construction is that when the Power Wave is taken out of the water the propellors switch off automatically.

This was am amazingly fun toy, and suitable for quite a wide age bracket. My 3 year old even managed to work out the controls and took the boat for quite a wonky ride as he slammed the steering wheel hard each way rapidly... and yet, the boat still powered on!

Best suited for a large body of fairly flat, calm water, this was a real treat to test. At first, an evening blatt around the local lake, which actually has a couple of areas of lakeshore dedicated to model boating enthusiasts, however this model fell between the sedate wind-powered yachts, and the rowdy combustion-driven speedboats, but still made a respectable showing of itself and gave some of the younger watches hope that they could one day harass innocent ducks 5m offshore too, just like their Dad's were doing.

Taking around an hour to fully recharge a dead battery, and getting between 35 to 45 minutes of playtime out of it, this is a model you may want to consider having a couple of spare batteries and a screwdriver on hand with you when you go out to play... I found that the battery seemed to last slightly longer is I ran the boat on an erratic, turn-heavy course, while straight runs gave better speed but drained the boat's battery faster. I suspect this is to do with how the dual propellers are controlled when it come to making turns - a straight run has both props running at full speed, while turning has one prop or the other reduced to slow or no spin at all, thus pulling less charge from the battery pack.

I did want to note that bringing the boat straight towards shore and executing a sharp banking turn then slamming it back to full throttle makes for a lovely rooster-tail of water shooting backwards and all over the unsuspecting children crouching on the water's edge... which my 3yr old thought was the highlight of the playtime! (But then, he's one of those 'full-on' kids who think being thrown around in a bear-hug is just amazing fun too.)

I was highly impressed with the safety feature on the boat that stops both props immediately upon the boat being lifted clear of the water. It makes for a slightly less stressful moment if an errant child grabs the boat as it passes... but I failed to test the 'return-to-range' feature because no matter how far I drove the boat out, I couldn't get it out of control range without first losing sight of it entirely! Even using a camcorder on maximum zoom, the boat stayed in controller range... so I'll just have to trust that this feature works. Mind you, even if it doesn't, I personally don't care, since I doubt I would find it much fun trying to drive a boat I couldn't see...

The only downside to this boat is the sheer lack of variety. Without risking the props getting smashed by running the boat over a water-mounted ramp or something, there really isn't much to do with this boat bar drive it around, and around, and around... until you get a little silly, possibly stupid, and start planning things such as using the boat to tow a platform out into the water to let of fireworks or something... and no responsible adult would do that now, would they? (Besides which, the backspray from the props tended to soak the fuses and stop them from igniting properly.)

Overall, for those who want something better than the "El Cheapomatic" crud available in your average toy store, but don't have the funds to go for something from that amazingly awesome speciality store down the road, this is a great way to break into the world of RC watercraft without killing the bank balance. The kids will love it, probably more than you will, and it's a brilliantly designed craft, with a claver water-tight battery compartment that acts as ballast to keep the nose-up-props-down position that gets you maximum thrust. Now all it needs is a tiny camera, and some running-lights so you can drive it around in the evening and still locate it visually.

Earth's first line of defense against the DECEPTICONS is here! Hidden from his enemies in vehicle mode, BUMBLEBEE waits and watches until he is called upon to protect Sam and any other humans that come under threat from MEGATRON. He is a cunning warrior against evil, and dedicated to those he calls his friends. When danger threatens, he converts to robot mode with his plasma cannon blazing!