« Tom and the Dragon review 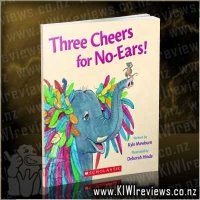 Once there was an elephant whose ears were so small, all the other elephants called him No-Ears. No-Ears is not a happy elephant.

Constantly teased for being different, it's not until the old grand-daddy bull elephant finds himself in a spot of bother that No-Ears discovers that being different can be an advantage!

I have to admit, the artwork was brilliant, with great detail and plenty of 'mood' to it. Deborah Hinde did an amazing job and the images suit the story perfectly.

As with all books aimed at this age group, it is VERY light on written content, and that's perfect for the target audience... but clever parents with smarter/older kids could easily add extra to the story, or do 'where is the...'/'what colour is this...' type activities as they read along.

Overall, a delightful bedtime read for the wee ones which is well laid out to help those learning to read.

This book has a very 'Ugly Duckling' theme with quite a traditional storyline about an elephant whose ears are so small that he is bullied by the other elephants and they call him 'No-ears' and refuse to play with him.

So other jungle friends help him come up with creative ideas to make his ears look larger, eg. feathers, butterflies etc. and the story has a nice ending where the elephant finds having smaller ears can be useful after all.

Something I didn't like about this story was the entire way through he is referred to as 'No-ears' (The name given to him by the bullies) and the book never mentions his name.

The kids liked this story and my son pointed out it was 'Like Ruldolph'.

On one of the city's hottest nights, New York Police Lieutenant Eve Dallas is sent to Central Park-and into a hellish new investigation. The victim is found on the rocks, just above the still, dark water of the lake. Around her neck is a single red ribbon. Her hands are posed, as if in prayer. But it is the eyes-removed with such precision, as if done with the careful hands of a surgeon-that have Dallas most alarmed.