« The Boys' Book of Adventure review

Tom and the Dragon review 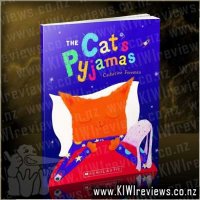 Meet Cat ...and his colourful collection of pyjamas. One pair for each night of the week.

But what will happen when he wears his MONSTER pyjamas?

The Cat's Pyjamas is a firm favourite in our house. It's about a cat who wears a different pair of pyjamas each night of the week and consequently has dreams about the theme of his pyjamas.

I was first drawn to this book by the illustrations - they are bright, bold and colourful, perfectly depicting each dream scenario. The pages are busy and exciting and my son loves searching for different things on each page. I like how the cat's stuffed rabbit is always there with him in his dreams as well - it's nice to have a friend along when you're going on an adventure. The themes are maybe slightly more boy orientated but I think girls would get a lot of enjoyment out of this book as well.

The sweet rhyming text makes it easy for little ones to read along and makes for a great bedtime story. My son particularly likes the bit of humour at the end where the cat wears monster pyjamas, doesn't sleep a wink all night and ends up falling asleep at breakfast. Maybe not so good if you have a child who is afraid of monsters but my boy finds it quite amusing.

Overall a very enjoyable read and one that we keep coming back to. My son even dressed up as the cat for book week at school last year.

This is a beautiful board book, well made with easy to wipe down pages to withstand toddler wear and tear. The pages of the book are splashed with bright and colourful images that are filled with diverse items that the cat dreams about; this variety of images will provide plenty of scope for conversations with your little ones.

The text is rhyming and descriptive, and you can tell that this will be a well-loved and often read story. It has an air of predictability about it which children love, and it helps them to join in with the text. The end of the book has a little twist which brings a smile!

I can see why The cat's pyjamas won the NZ Post Children's awards, and I can see that in the future it will be a kiwi must have like Hairy Maclary and The Little Yellow Digger. I will be purchasing a few of these for the younger members of my family for Christmas.

I was lucky enough to win this in board book form recently thanks to the KIWIreviews 10th birthday celebrations. This is an amazing book. From a purely illustration point of view, I love each picture. They are so bold and colourful. A great use of colour. The cat is drawn in such a human style, relaxed in his jimmy jams. For each real world scene, the background is stark. This makes the pyjamas really pop on the page.

In the dream pages, the colours and scenes take over the whole page in a two page spread. Because there are 7 different sets of pyjamas, there is literally something of interest for any child. The scenes could be said to lean slightly towards "boy" themes, but I think it's very universal. Certainly my eldest had no trouble being interested in the various scenes. The only one that didn't really interest her was the road dream.

The prose is great It rhymes in the dream scenes and has lots of repetitive lines as well. It is easy to read and quite a pleasure really. I loved playing spot the rabbit as well. Being a board book, I feel like I can let my youngest take off with the book. She loves looking through books anyway, but she will happily spend 30 minutes at a time sitting with this, flipping through and pointing to things.

This is a very simple bedtime book about a cat who every night wears different pyjama's and then dreams about whatever he is wearing. Miss Six and Miss Four are a bit beyond this type of story (Miss Four declared that it was for babies) however Miss Two has enjoyed reading it.

I myself am not so taken with this book. I think I would have liked the illustrations to be a bit more detailed. Saying that though Miss Two is happy with it and it is a nice short book to read in bed. Overall it is a book that is being read regularly and has meant that pyjamas are back in fashion in our house after a summer of nighties!

I wouldn't pay $19.50 for this but would consider buying it on special and for a three year old and under age group.

I loved this book about the cat and his different pyjamas. It is an excellent bedtime story for young children to talk about the routine of getting into our pyjamas and going to bed.

I read this book to my son tonight and he really liked the pictures he loves cats so liked pointing at the cat. When we finished I said to him you will have to have dreams about cars because his pyjamas had cars on them. When he is older he will understand more and be able to tell me what pyjamas he wants to wear to bed so that will be nice.

The pictures are beautiful just simple illustrations of the cat and the things he dreams about. I loved the pictures of the monsters they were very bright and colourful and spooky looking. I also loved the double page picture of the Cat staying up all night when he wore his monster pyjamas, and the picture of him asleep at breakfast time. All in all a great story that i'm sure will be read many times at our house.

The Cat's Pyjamas is a very sweet bedtime story about a cat who has a different dream each night depending on the pyjamas he is wearing. Whenever I read it to my girls I make it the last story of the night and we talk about what they are going to dream about as I tuck them into bed. Sometimes when they are getting changed at night they will tell be that they have chosen these particular pyjamas because that is what they want to dream about.

The book was given to my daughter for her fourth birthday by her grandparents. As my mother-in-law is an experienced New Entrant teacher I know she will only give books that have passed the teacher test (educational, enjoyable and no errors) and she will have tried it on her students. This book would also be good for teaching the days of the week to young children.

It is a favourite story with my girls. As a parent I enjoy the rhyme and that it is just the right length for a tired four year old and nearly three year old to listen to.

The one thing that I really loved about this book, was the illustrations. The pages where you get told what kind of pyjamas the Cat will be wearing, is so plain except for Cat. But turn the page over and you have a two page spread completely full of colour and pictures. So much so, that is what my kids loved most about the book. Half the time reading it, was just going through and pointing at everything on the page and identifying every little thing.

The only thing that I wasn't too fussed on was the ending. Cat stays up all night and falls asleep at breakfast because he was scared of monsters. For my son, in his current age of being scared of monsters hiding in the bedroom, having Cat stay awake all night fighting the monsters would have been a better reason for him to fall asleep at the table.

But all in all, it is a great book, and one that my kids bring out to read time and time again.

My kids totally loved this book. It suited both my son and daughter which is hard to find with books these days as most of the time they are too gender specific. The cat having his dreams made the kids talk about dreams they had been having and they loved the end of the story where the cat falls asleep in his breakfast, they want to read it over and over again every night for a week so far. Highly recommend for 2-6 year olds.

A very cute story of a cat who has a dream, that follows the theme, of that night's bedwear. With a different set of PJs for each night, with Sunday being Monster PJs, the cat's dreams are peaceful and fun for 6 nights a week... but Monday morning brings an earful of porridge and probably a droopy day at school.

There isn't much to this story, less in fact than many of its peers, but the artwork is quirky, and the story is endearing... and my youngest loves it even though he doesn't really understand it.

Overall, more cute that fulfilling, but still a lovely tale for the wee ones before bedtime... but if they own a set of Monster PJs, it may be time to think of dying them, biffing them, or not reading this story to them just before bedtime.

This book rhymes which is nice, and tells the tale of a cat who has different pyjamas for each night of the week and has dreams related to each pair. It is VERY cute and has a very cute ending after that cat is awake all night worrying about monsters after wearing his monster Pyjamas (what parent can't relate to this)!

In order to develop a secure defense against a hostile alien race's next attack, government agencies breed child geniuses and train them as soldiers. A brilliant young boy, Andrew "Ender" Wiggin lives with his kind but distant parents, his sadistic brother Peter, and the person he loves more than anyone else, his sister Valentine. Peter and Valentine were candidates for the soldier-training program but didn't make the cut - young Ender ... more...