Doctor Who - The Mutants review 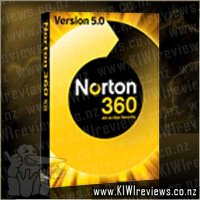 Disclosure StatementFULL DISCLOSURE: A number of units of this product have, at some time, been supplied to KIWIreviews by the company for the purposes of unbiased, independent reviews. No fee was accepted by KIWIreviews or the reviewers themselves - these are genuine, unpaid consumer reviews.
Available:
online, and at quality retailers

Well Symantec are back with their latest incarnation of Norton 360 the All-in-One PC Security and Performance suite.

Essentially its the same as version 4, but better. The installation time seems to have gotten even better, it was about 2 minutes for me and no reboot required (but don't assume that this will always be the case as this is Windows we are dealing with).

This time around the core test equipment has changed (due to the previous test equipment developing a slight heat problem - okay it fried the RAM and partially cooked the CPU). So the specs this time are as follows.

Right back to the review. As stated just above the installation was quick and painless and I was up and running within two minutes, this also included the activation using our My Nortons Account.

The first step was to test the firewall as it is straight out of the box. To do this we use the SheildsUp tools developed by the Gibson Research Group Website: www.grc.com, out of the box Norton 360 v5 is about as secure as it can be. It did fail on test partially but it is not anything that would affect the security of your PC in anyway.

Next was the Antispam and I thought i'd see if it had improved over the old version, which while it was good had a few idiosyncrasies that I did not become aware of until after I had written the last review. The slight hiccup the last version had was to do with the emptying of the Spam folder. If you had some items that you had checked and so were now marked as read and some that were still marked as unread, clicking the empty spam folder button resulted in only the read items being moved to the Deleted Items folder, and another press of the button was required to get rid of the rest, well with v5 that is now no longer an issue as one click will move everything to the Deleted Items folder no matter what it's status is. Version 5 also seems to be catching alot more spam straight out of the box, and no configuration seemed to be required.

Now onto the biggie the Anti-virus. For this I grabbed a CD that I have with about 3072 viruses on it to test. Well it successfully detected and either deleted or moved to the virus vault 3025 of these. I suspect that why it may not have gotten all of them was some of these hark back to the days of MS-DOS and have probably all but died out in the wild now. However what it did find was a 98.4% success rate, not bad at all, in fact in tests by other Anti-virus testing companies Norton 360 v5 got the following ratings.

• Norton has received the VB100% award from Virus Bulletin.
• Both ICSA Labs and West Coast Labs certify Norton technology for virus detection and removal.
• AV-Test.org tested Norton Internet Security 2011 edition which is the same security engine used in Norton 360 v5. Norton achieved high scores of 5.0/6.0 in Protection, Usability and 5.5/6.0 in Repair of security threats.
• Dennis Technology Labs rated 360 v5 as the best performing product along with Trend and ESET.

Also part of the Anti-virus part of Norton 360 v5 is Norton Insight, which as well as being used in part for the scanning of removable media, it is also what scans and checks every file you download and then compares it against a database that is constantly being added to by the Norton users community. This then lets you know if it thinks the file is safe or not by means of a small discreet pop-up window located in the bottom right hand corner of your screen. What's also good is that if you get told it thinks the file is unsafe, or unknown and you know the file to be good you can then submit your determination to the database to help more users know the file is safe.

We still have the Norton Websafe which will let you know if it thinks a site is safe or unsafe in the likes of a google search.

The parental controls have also received a makeover with the ability now to sign up for a Norton account and you can then track what your children are doing on the net from anywhere you want, even from work. Now this isn't a replacement for a tool like Net Nanny or CyberSitter, but it does give a good rundown of exactly what your kids are up to when you aren't looking, and in this day and age, that's a good thing no matter what your kids say.

I honestly feel that Symantec, has successfully shrugged of the burden of being known for resource heavy security programs and is now once again the world leader in Home Computer Security Solutions.

Quickly bring your creative ideas to life with a simplified learning curve, plugins to the Adobe Create Suite and award-winning rendering quality rivalling any software at any price.