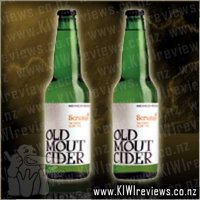 Old Mout Scrumpy is our own, rather effervescent take on the traditional Scrumpy recipe, with a gutsy apple flavour and packing a fair wallop, to seriously satisfy a solid thirst.

Looks: Clear (not at all cloudy) light honey tones
Smells: The honey aromas of a late harvest fruit
Tastes: Smooth to start with, then lingering tartness at the back of the mouth with musk, marmalade, rose and raisin popping over to say hello
Alcohol: 8%

This one's a bit of a meat lover, so give it a go with succulent slow cooked pork dishes, spare ribs, or most barbecued meats. If you're more of a herbivore it'll also help a nice piece of marinated haloumi go down a treat.

I sat down for a glass of Old Mout Scrumpy with my husband tonight. We both drink a lot of ciders, and he is particularly fond of the scrumpy style. So he has tried a lot of different scrumpy ciders on the market. He poured us each a glass and we smelled the cider first. Its got almost a lemony honey smell to it, with a hint of alcohol muskiness as well which all ciders seem to possess.

As you taste it, its got a strong honey flavour. I did pick up the marmalade flavour, or at least a mixture of citrus flavours and a raisiny port-like quality. The alcohol taste is quite strong as well, but that's to be expected with a higher alcohol content. This is a strong cider at 8%. My husband said that this was a much sweeter scrumpy compared to others he has sampled. He also felt that the taste of the alcohol was much stronger.

I had to agree once I finished my glass. It warmed my throat and tongue almost immediately. You really can't mistake the higher alcohol content. As the liquid warms up the alcohol fizz taste becomes more apparent compared to the apple flavour. This was not my favourite Old Mout cider, but that is not to say I wouldn't drink it in future. I prefer a lower alcohol content, and a more fruity flavoured cider. But I liked the port-like taste to it when I could detect it.

I'm not normally a fan of ciders, as most I've tried have been rather dry and harsh on the stomach, so I was somewhat hesitant to give the Old Mout Ciders a try, but I was pleasantly surprised. Old Mout Ciders, it seems, are far smoother and gentler on the stomach, yet still have that sharp tang that lets you know it's not just an innocent fruit flavoured fizzy drink.

The Scrumpy version was definitely the strongest of the 4, with a very strong but pleasant fruity flavour that gave quite a bold alcoholic bite. I could certainly taste the apple, but there was no harsh dry afterbite that I usually find in ciders that tends to leave me wanting a glass of plain old water. Instead, it had a rather pleasant mild aftertaste that lingered for a little while, keeping just a hint of sweetness to it.

This is a drink that warms you right through, so would be the perfect beverage for a cool winter's evening. Out of the 4, this was my 3rd favourite and one I'd happily go back to if I was in the mood for something fruity with a bit of a kick to it.

This cider is lovely for marinating chops and steak for the BBQ, which is what we did, and it gave the meat a very nice bite, and combined with the salad and crusty bread it made for a very very nice meal.
Unfortunately as a beverage, I will be honest, it was a little too strong for me to cope with, as am not a big drinker... but as a marinade it is just perfect! I think it would be a very nice quick and easy marinade for the middle of winter too, giving some life to some otherwise boring cuts of meat.

This was a rather delightful little drop, it had a nice body to it, and the taste was as good as other ciders I have had. I will be honest I didn't actually notice any extra kick to it despite the extra 3% alcohol, but then as I used to be mainly a spirit drinker my senses may be a bit dulled in that department. Still it did go down a treat with a plate of steak egg and chips and that to me is a mark of a good drink.

this was a very strong cider at 8% alcohol. a bit too much for my tastes as i prefer the less potent ones. ok so that makes me a bit of a lightweight i guess but after nearly killing my liver years ago with binge drinking i take a lot more care these days. ignoring the booze side of things the taste was really pleasant with a nice fruity finish and a slightly sharp acid aftertaste that makes me think of good white wines. it was a really nice drink to have on a hot afternoon while the meat sizzled on the grill. beats a rough beer hands down and gave the meat a really nice taste when i tried basting a couple of bits of steak with it. next time i think i might try using it in a marinade or something and soaking pork chops in it. well worth a try for those who like their cider with a bit of a punch to it.

This flavour had a very strong aroma when you opened the bottle. There was strong apple flavour with a tangy bite. The flavour disguised the kick it packed and it is served best ice cold.

Had a pale golden colour and had a very minimal fizz factor, which made it easy to drink. This had a dry yeasty aftertaste.

This flavour had to be my favourite of the four ciders and I would happily have it again.

Quite possibly the best cider I have had in quite a few years.
This one has quite a unique taste to it. There's a sharpness to it that gives it a nice bite as you swallow and it goes very well with sweet desserts as the sharpness cuts the sickly sweetness of high-sugar foods. I also found it was really nice with the good old fashion fish'n'chips meal from the takeaway up the road who ALWAYS seem to load on way too much salt no matter what I request.
Best served chilled to near freezing, I decided to put this in the chest freezer for about 15 minutes before serving and that really made it something special. The sudden burst of warm as the alcohol hits your system from a frozen mouth is something to try.
All in all a delightful drop of apple juice at its raunchy best.

This was a delightful drop indeed, with a rich, full body and a hint of sharp acid while it was in my mouth, followed by a softening burn as it slid down. This was a lovely drink to go companion to a plateful of steak, sausages and salad during a BBQ lunch, though I have to admit I forgot about the higher alcohol content and wasn't prepared for just how it snuck up on me while I was cooking.

With enough 'fizz' to make it tingle on the tongue, this is far from being considered 'a fizzy drink' - it still has that solid mouth-feel that hallmarks a real drink not to be taken lightly.

Overall, though it wasn't my favourite, as a long-time cider lover this was certainly right up there. Delightful with a dollop of blackcurrant syrup mixed in, it was still a very pleasant drink on a hot day in good company.

This crisp dry wine has a delicate feijoa bouquet with a clean refreshing finish. Serve well chilled. We create our wine amongst the orchards and forests of Lothlorien which is nestled in subtropical Ahuroa Valley, where we have been growing organically since 1971.