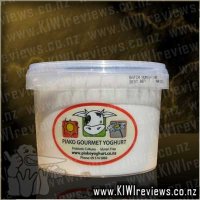 Our yoghurt is based on Grandma's recipe a thick creamy Australian Greek style yoghurt, originating from Queensland, but now full blown kiwi made using only the best local New Zealand ingredients. Free from preservatives and artificial ingredients the 100% natural yoghurt is rich in benefits and 95% fat free.

Health benefits include, a pro biotic containing acidophilus, bifidus and casei culture strains. All which assist in boosting the levels of good bacteria in the body more specifically the gut system.

Natural - make it your own or eat it alone. Our superb honey sweetened yoghurt with no extras.

After having tried the other deliciously tasty yoghurts in the Piako range, I decided to purchase Natural flavoured variety as a recipe I planned to make called for a plain yoghurt, which is something that I don't usually tend to buy as id much prefer to buy flavoured yoghurts for eating, with this in mind I thought there was no way I could go wrong with Piako due to my pleasant past experiences.

The yoghurt itself was thick and creamy, and had a slight taste of vanilla to it which I thought was really nice and helped to sweeten it up a little bit, though I must be honest and say it isn't something I would go out and buy to eat as is, as there are much tastier yoghurts to go out and eat. However as an ingredient in a recipe this worked fantastically and in my opinion it made the recipes that little bit more special and creamier than your average yoghurt would.

My initial reason for purchasing this yoghurt was to use it in a dough for which I was to make cinnamon scrolls with, I simply added 1 cup of the yoghurt with 2 cups of self-raising flour and added the 2 together until they formed into a soft dough, rolled it out sprinkled with melted butter, cinnamon and brown sugar, rolled the dough up and cut into shape. These cooked perfectly and were delicious topped with a yummy vanilla glaze. I have also used this yoghurt in smoothies which always makes them rich and creamy, the addition of your favourite fruits always helps to sweeten the yoghurt. The yoghurt is also great as a healthier alternative to butter chicken in place of thickened cream which my go to recipe usually calls for, the yoghurt didn't change the taste at all and tasted great.

All in all a great yoghurt to use when needed in a recipe and as a bonus its full of lots of great health benefits such as probiotics! I paid $3.99 for this yoghurt on special which I thought to be pretty good for the product which you are getting, especially with it's many uses.

The natural yoghurt is a great plus one to many dishes, it's just so versatile, it can be used with just about any fruit, or cereal.

This is a great natural alternative to having milk with your cereal, or even instead of using ice cream & milk to make those milkshakes, use some natural yoghurt, mix/blend it with some fresh fruit, and viola one extremely healthy and delicious fresh fruit smoothie.

Admittedly to many people the taste of natural yoghurt isn't to everyone's taste, but my motto is, if you don't like the flavour, mix it up add something to it make it how you want it

Piako Natural is not the greatest yoghurt I've tasted, it didn't have any extra flavour and made me a bit queasy, but that was probably because it was a little bit past it's "Best Before" date. It didn't taste very nice and was a bit on the "goopy" side, but it still had a nice, creamy texture.

I think that this would be a good sweetener in a smoothy or a great ingredient for making your own flavoured yoghurts! I found it hard to eat for a long time, so I could only eat a few spoonfuls, give or take, but it was great to eat when I dipped a banana in it. I find banana dipped in yoghurt a great snack.

I think you will like this Piako creation, just try and eat it before the "Best Before" date! :) Get ready for a zingy taste in the mouth that will give your taste buds an adventure, try "Piako: Natural" today.

This was delicious and creamy yoghurt and still tasted decadent despite being 'plain'. I don't think this is a 'healthy natural' option compared to other 'natural' yoghurts you see in the supermarket, but certainly a delectable treat.

It has a Weight Watchers value of 4 Propoints for 100gm (1 serving or 1/5th of a container) which surprised me as it was higher than the three other fruit yoghurts in the Piako range.

The yoghurt was a nice, very thick and smooth texture. It also had a very pleasing tart taste with a hint of honey to sweeten.

Piako natural yoghurt is most definitely the nicest flavored natural yoghurt I have ever tried. The kids loved it, especially our 8month old baby, it was so much yummier than the others we get.

A great thing about these yoghurts is the packaging easy to stack in the fridge and they are reusable containers too.

You would be able to use it yourself as a base for frozen yoghurt by adding your twist of flavours or just keep it plain, as it has plenty of flavour on its own.

We are huge fans of natural yoghurt in this house, and the kids also love it especially for breakfast. So this one did not last longer than breakfast time here.

Piako natural yoghurt is most definitely the nicest flavored natural yoghurt we have ever tried. The kids loved it, and even commented that it was so much yummier than the others we get. So this one is now a regular on the shopping list.

Like the rest in the range, outstanding flavor, creamy, and healthy as. Will be checking to see if it is available in a larger container.

The other great thing about these yoghurts is the packaging. Not an annoying shaped container meaning that some of the yoghurt is left stranded in the bottom of the pottle. It can all be eaten, right to the very last drop.

I found this to be one of my favourites of the four flavours, and slightly milder than the others. While still having that slight hint of cheese, it had quite a clean, crisp taste that would mix in nicely with pretty much any fruit you added in, which makes it perfectly suited for several family members who have different preferences, as each person can add the fruit of their choice in and adapt the taste to suit them. I was rather disappointed though that I couldn't taste even a hint of the honey that the label said the Natural version had.

Again this yoghurt was thick and creamy, and while heavier than many other brands, this particular flavour was actually somewhat lighter than the other 3 Piako flavours I tasted. This is a yoghurt that is thoroughly enjoyable on its own, or mixed in with fruit, in a smoothie, on cereal, etc, and one I could easily finish the whole container of in one sitting.

Now this yoghurt had to be my favourite of the Piako range. So many possibilities to be had with this flavour in particular.

The yoghurt was a nice, very thick and smooth texture. It also had a very pleasing tart taste with a hint of honey to sweeten.

I plan to purchase more of this at some stage to use as a base for frozen yoghurt by adding my own twist or I will just keep it plain, as it has plenty of flavour on its own.

Wow this is great! I have never come across a Natural flavored yoghurt that tasted like this. Out of all the flavors this is in my top two that I really enjoyed and have since bought more of.

I really enjoyed the slight hint of honey that comes through with every mouthful and the creamy, smooth texture is great. I could not ask for a better natural flavor in a yoghurt.

I also added my own home-grown passionfruit to it which made it even more great. I just love how with this one you can add your own flavors. My kids really loved having this on their cereal with chopped up bananas. It makes for a nice healthy treat for them.

Created with your body in mind, Gem Escape Meals use only safe ingredients to create top quality meals. Whether you are gluten free, dairy free, soy free or just enjoy good, healthy food, there is a delicious, convenient meal to ... more...