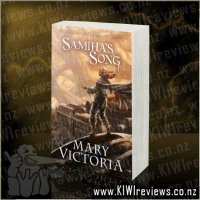 Tymon leaves his new home and his beloved Samiha to complete his Grafting studies with the famous Oracle of Nur. But Tymon and fellow traveller Jedda find that locating the Oracle in a corrupt and lawless city run by pirates and slave-drivers is no easy matter.

Samiha's fate has been predicted by Grafters down the ages. When she is captured in Cherk Harbour and charged with grand herasy, there seems to be no way out... but Tymon does not believe in fate and is desperate to save her life.

As chaos hums through the tree, survival revolves on the fate of just one...

The 'reality' of this story keeps shifting, not only in direction, but also across dimensions... this certainly keeps things interesting during the read. You can never be entirely sure which reality the characters are in... and even then, they can seem to be in one while interacting with another. It's quite fascinating to see how Mary gives each 'paradigm' or 'reality' a theme... the Mortal world, the World of the tree of Being, the Veil... they all have a common thread to one another of course, but they each carry a flavour both unique and indicative of it's function and inhabitants.

I was particularly surprised to see the whole 'trinity' aspect expressed in such a way, where the Mortal realm is once again the middle-ground in the war between 'good' and 'evil' - the demons of the Veil can come to the mortal realm, but not to that of the 'Tree of Being'... For those with a Jesus-centric religion it will feel all too familiar from 'Sunday School' lessons.

This story picks up very shortly after the epic battle that closed the first book. Tymon has proven himself worthy of the Freeholders' trust and has shown himself to be a Grafter in of some note but in need of further training. To that end he has been instructed to travel and seek the guidance of the Oracle, a mysterious figure who - for obvious reasons - has to keep a very low profile against the predations of the Argosians.

The journey leads Tymon along a path away from Samiha, and towards a fate he not only refuses to accept, but actively fights against... with results both unexpected, illuminating, and disastrous for every inhabitant of The Tree, on both sides of the battlefront.

The characters reveal a lot more of their true natures, pasts and possible futures in this volume, and in some cases that truth changes the whole tone of the plot at that point.

Overall, another fascinating installment in this saga, and I can only wonder where the next book will take the story, because it seems to be running out of key characters at a prodigious rate.

After a top secret experiment transforms the sickly Steve Rogers into the powerful super-soldier known as Captain America, Steve can finally live out his dream of fighting for his country.

Dropped into the middle of war-torn Europe, Captain America's first mission is to infiltrate the base of the evil HYDRA organisation and rescue a group of captured Amercian soldiers - including his ... more...