I am Number Four review 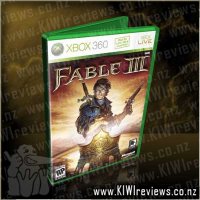 In Fable III, the latest instalment of the critically acclaimed Xbox 360 exclusive franchise, fans new and returning will now embark on an epic adventure, where the race for the crown is only the beginning of your spectacular journey. Five decades have passed since the events of Fable II, and Albion has matured into an industrial revolution, but the fate of the kingdom is at peril. You will be called upon to rally and fight alongside your people, ascend to the seat of power, and experience the realities of defending your throne. Along your journey, the choices you make will change the world around you, for the greater good or your own personal gain. Who will you become? A rebel without a cause, the tyrant you rebelled against, or the greatest ruler to ever live?

•  Be the hero and forge your own destiny. Storytelling comes to life as "Fable III" puts you and your hero in the centre of an epic journey that traces your rise from revolutionary to ruler and beyond, along with all the action, drama and humour. Interacting with the world of Albion has never been easier or more rewarding. The Expressions system offers an ingenious new Dynamic Touch feature that allows your hero to reach out and embrace a loved one, or exact retribution against those who have betrayed you. Your hero, your faithful canine companion and even your weapons now also evolve to extremes mirroring your morality and personal style of combat. The emotional connections players will develop in the world of "Fable III" will lead to some of the most memorable moments ever experienced in a game.
•  Where blockbuster action meets adventure. Your journey spans from the streets of a thriving and industrialised Albion to the surrounding battlefields. The pioneering one-button combat system allows players to easily combine different styles in their arsenal - hand-to-hand melee attacks, long-range precision shooting and wickedly catastrophic spells - to advance the one-button combat mechanic to a full scale, thrilling level that offers infinite ways to engage, experiment and compete.
•  Choice and consequence. A core tenet of the "Fable" franchise, players are presented with infinite choices and consequences that impact the world around them. Good or evil, loved or loathed, career versus family, or just you and your faithful canine companion - live the life you have always dreamed. More so than ever before, your choices lead to far more profound outcomes that impact your every being. Whether it's deciding the outcome of minor squabbles or changing the direction of the entire kingdom, these key decisions will change the world forever.

It's a good game, an easy one to replay over and over again. It's a good choice if you enjoy games that have free roaming capability. It is a really good step in the series, and it comes with some decent downloadable add-ons to the story line. Yes, it can get tedious at times, when you have to return to places that you have already been a few times, and there were some strange moments, but all in all a good game.

I really enjoy how you can choose how you turn out. Are you good, bad, or somewhere in the middle? And perhaps the only things I would change, or at least warn people coming into the game for the first time, is the fact that there is sex, unprotected/protected, and that it also now includes STD's. But all in all a great game.

Having been an almost instant convert to the first game in this series and an adoring fan of the PC version of the same game, I was very keen to see the much-hyped XBox 360 put on it's show with this instalment of the story.

I admit, the graphics and gameplay were drastically improved, with much smoother artwork, a lot more graphic action, and some very nice little surprises (particularly the Hollow Men), but it just seemed a little underwhelming in places. It wasn't so much the gameplay, as the layer design and lack of pre-loading when crossing zone boundaries. Little things that have come to be a part of 'the default toolkit' consumers have learned to expect from high-level games such as this.

What really impressed me though was the sheer depth of the storyline. Sure, you have to jump through a LOT of hoops, revisit a lot of the venues multiple times, complete a veritable mountain of quests, and do some dang strange things to progress the plot (I mean, what purpose is served by making a royal decree while wearing a chicken suit?!) but it's all fairly seamless and integrates smoothly.

One element that did concern me was the inclusion of relationships and sexual interaction between players via the XBox Live Network. Now don't get me wrong, I have no real issues with that kind of content being in the game... I just found myself concerned with it being not only permanently 'on', but also actively encouraged by it being the key goal in a number of quests. Making this content optional or by age-verified download would have been a smarter move IMHO. Everyone, and I do mean everyone, should be given the choice as to how they want to play the game - it is about choices and consequences after all - but basic child-safety should also be a design choice.

Overall, as is to be expected from this franchise, the game has more twists than a solar storm's magnetic fields, and is just as convoluted. This keeps you on your toes and works your memory of the map, the characters, and the plots - both large and small. You may want to look at waiting until the price has come down a bit, or checking with your local games store for traded-in copies, but it is certainly worth a play or three.

Have you got eyes in the back of your head?

That Warm Christmas Feeling! is by artist Graham Thompson.

All the family are enjoying that warm Christmas feeling that fills the room while Mum brings in the tea. Then why does Dad look so cross?

The puzzle holds the answer! The picture on the box lid is not the puzzle; ... more...