The Legend Of The Guardians: The Owls Of Ga'hoole review 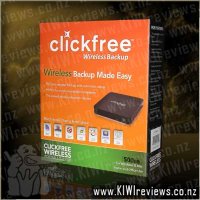 The Clickfree Wireless is the world's first backup product that backs up every PC and Mac without having to be plugged into the computers. Using proprietary BackupLink technology, Clickfree Wireless automatically performs all scheduled backups wirelessly from anywhere in the home, including from different rooms, for all your computers. Never worry about backing up again! It's that easy!

Clickfree Wireless is also the perfect solution to protect all the music and playlists of your iPod, iPad or iPhone, it is the easiest method of migrating from your old computer to a new Windows 7 or Mac computer and for the photo lovers, it will find and backup every photo on your computer with the option to easily upload to Facebook, email to family or friends, or archive onto a CD or DVD for sharing or safe-keeping. Clickfree Wireless also has the easiest totally automatic restore functionality available.
The Clickfree Wireless is the most feature rich, complete backup solution available and it comes in a 500gb storage capacity.

KEY FEATURES:
•  Award winning Clickfree backup
•  No software to set up or install
•  World's first wireless backup capable of wirelessly backing up every computer connected to the router
•  Proprietary BackupLink technology automatically backups up every computer in the home connected to your router.
•  Smart restore, or migration to Windows 7 or Mac computers
•  Smart viewer for viewing backed up photos and other documents
•  CD/DVD archiving for sharing with family or friends, or safekeeping off-site
•  Photo sharing by email or uploading to Facebook
•  Backs up both PC and Mac computers to the same unit
•  Archive iPod/iPad/iPhone music and playlists
•  Built-in USB cable ... no cables to carry around

OK, this review was REALLY difficult to write. It started off heading steadily towards a definite "Don't bother!" but thanks to the intervention of an expert from CANADA became a resounding success... if you want to read more about the 'Saga of the C3 review..." you can find it on our blog in the February archives.  - or click here -

So, forgetting about all the dramas, here's how it SHOULD pan out...

The box contains a small shiny black device about the size of two CD cases stacked on top of each other, a power cable, and some paperwork. That's it. The black box has a USB cable built into it, the power adapter is pretty small and light, and the paperwork just gives you some basic info.

Plugging the device into a USB port on the first machine you want to be able to back up is required. If your machine has AutoPlay enabled, you won't have to do anything - the device will fire up the installer and start to place the 'client' software on your machine. A few clicks to accept the EULA and configure your backup preferences, then it will learn the network settings and scan your machine for all backup-eligible files. You are advised to do your first backup 'direct' - while the device is still connected directly to the PC.

Once this is complete, you can disconnect the device and use it wirelessly or plug it into the next machine you want to have do wireless backups. If you decide to have multiple machines using this backup, I STRONGLY suggest you go into the scheduler and set the backups to be at LEAST 3 hours apart from each other, or on different days... trying to shift gigs of data from multiple machines at the same time would be... umm... bad.

Once you are ready to 'go wireless' - unplug the device from the USB port, plug the power supply in and you'll notice the light on the bottom turns orange. This indicates that the box is booting up and connecting to the wireless access point. "Booting up?" you say... yes... this little black box has a trimmed down linux box inside it, which boots up and controls the wireless connection. Once it is ready, the light will blink out and come back on blue. This can take up to 5 minutes. if it's still orange after 10 minutes, you have a problem - call the helpdesk!

Assuming it all works, you'll see a popup box on screen saying it has successfully communicated to the device through the wireless connection, and is ready to do backups. This is very good news!

The box runs on a 2.4GHz band, which means your bandwidth and transfer speeds won't be blazing, but they'll be sufficient to shift a fair bit of stuff. It took around 8 hours to backup 31gb of data wirelessly, which wasn't too bad at all really.

Overall, though there were teething troubles, it wasn't too bad after all the dramas were sorted out. The ongoing usage has proven itself well, with backups being significantly faster as it only backs up files that have changed since the last time, making for speedier and more efficient nightly/weekly/monthly backups. For home users, a weekly backup should be sufficient really, while businesses may want to look at multiple devices, one that does daily backups, one that does a weekly schedule, and a third that does monthly backups. Multiple levels of redundancy make for safer data. Thankfully these units come in 1TB capacities too, and hopefully 2TB units aren't too far off.

Designed for performance enthusiasts and anyone who simply wants to get more out of their system, Crucial Ballistix Sport performance memory helps you do just that. Give your processor the resources it needs to perform and make your computer faster and more responsive.