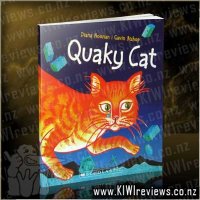 On a cold Christchurch morning, while the city was sleeping,
before the birds roused him with twitters and cheeping,
curled up on the end of his friend Emma's bed,
Tiger woke with a start... and a feeling of dread.

Written in response to the Canturbury Earthquake of 2010, Quaky Cat is an evocative, uplifting story that will touch the hearts of all who read it.

50% of net proceeds from sales of this book will be donated to Canterbury charities.

When the earthquakes first started to shake Christchurch, I was like many many people - completely glued to the TV, watching the news, the tragedies, and hoping very moment for good news. And like many people I am a parent. Sometimes during moments like this, you aren't sure whether to turn the TV off, or not. My daughter was 3 at the time and although she didn't show any outward signs of unease, it did affect her knowing that something like this had happened to friends of ours, and so close to home.

I first realised she was affected when she came home with new art she had done of "broken buildings" and when her play involved houses breaking and hurting people. In her own way she re-told the story, with heroes and rescuers saving the day. So when one of her Nana's got "The Quaky Cat" for her for Christmas last year it was a very welcome addition to the bookshelf for many reasons.

Now, the story itself is beautiful, full of hope and seeing the silver lining, what's really important in life. The illustrations are really striking, bold, and colourful. But its not a book we can read over and over again. I find myself bawling my eyes out for the last 5 or so pages, and having to stop every sentence to compose myself. And she, well she doesn't like to dwell on what happened either. Though she is happy that it ends on a positive note obviously.

I do think its an important book, one that should be purchased, not just because of the charity element. Its another way to explain natural disasters to a child. In a way that is reassuring, even amongst the chaos. Maybe as time passes and its not quite as raw I'll be able to read this aloud tear-free.

My 7 year old used his Book Month voucher to get this book, and really liked the fact that money from the book got donated to Christchurch.

This book is very relevant given the recent earthquakes but presented the situation in a novel way through the eyes of a cat. It reflected how scared cats (and people) feel in this kind of natural disaster and how they react. I think because it addressed it through an animal and not a person it made it easy for kids to relate to without being 'too close to home'.

Great for animal lovers and great for children dealing with their feelings after an earthquake. The price, while not cheap, is worth it given its a partial donation.

The perfect book for a scary time.
While babysitting my 7 year old nephew he asked if I could read him this book. Little did I know that he had read it over and over so much that he ended up reading it to me.
What a beautifully written and illustrated book. It flows wonderfully from page to page. I enjoyed reading this book so much I got a copy for my daughter who, at 13, enjoyed it also.
It has a lovely message about home being where the heart is. Highly recommended for all ages and not just children of Canterbury.

Living in Christchurch, I am particularly moved by this gorgeously illustrated tale of a cat running away in the Christchurch earthquake and then finding his way 'home'.

Gavin Bishop is a talented artist who creates a surreal landscape in oranges and blues. I love the visual references to Christchurch landmarks. Best of all, however, is the flowing, rhyming prose by Diana Noonan. It is engaging, emotional and reminds us that home is not the bricks and mortar, it is the place where 'love keeps us safe from the storm'. I certainly will be reading this story to my children one day... a great way to explain about the earthquake and what it was all like!

I think this is an excellent story especially to those of us in Canterbury. At junior prizegiving the prioncipal read this story to everyone and everyone seemed to enjoy it. I found it very touching (there may have been a tear in my eye even) when he found Emma again after the quake - very moving.
I plan on buying it as a keepsake and reminder of the quake for my daughters.

Score: 9.5
Product reviews for listing 7189: I Will Love You Anyway -  Author: Mick and Chloe Inkpen

From the celebrated creators of Kipper, Wibbly Pig, and Zoe and Beans comes a picture book to treasure. Dog is very badly behaved - he destroys everything, chases cars and won't stop running away! But when he finds himself lost and alone there is one person he can count on.