ProdID: 2761 - The Art of District 9
Authored / Edited by Daniel Falconer 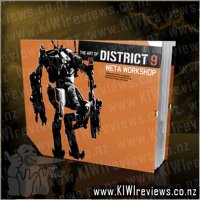 The Art of District 9 product reviews

Under the supervision of multi Academy Award winner Richard Taylor, Weta Workshop was responsible for the design of the creatures and technology for director Neill Blomkamp's 2009 feature film, District 9.

This book illuminates the creative design process, detailing two years of interaction between Weta's artists and District 9 director Neill Blomkamp, including hundreds of images of concept art from both the designers and director, museum quality photographs of the props and sculptures, and insights in the form of quotes directly from the artists.

Many of the images included have never been made public before, including some that were cut or barely glimpsed in the finished film. Written by designer Daniel Falconer, with a foreword by Neill Blomkamp and introduction by Richard Taylor, The Art of District 9 offers an unrivalled glimpse behind the scenes at the creative processes that shaped all of Weta Workshop's contributions to this amazing film.

Though I wasn't exactly a great fan of the movie, I have to admit that the 'behind the scenes' aspects intrigue and impress me far more. Seeing and understanding how much goes into the background - the setting of scenes and those tiny details that our eyes pass over in the movie, but without which the scenery would be glaringly fake - captivates me.

Capturing the entire story of District 9, from how the creatures themselves evolved from large, ponderous creatures to the lean insectoid 'shrimps' we saw in the final movie... how the weapons and technology evolved... the 'back story' on the alien language and culture, right down the smallest details, such as the small signs on and around the various characters in the movie... this book basically gives you the insider's view of the movie as no cinematic viewer could imagine. For those of us who value the 'who and why' just as, if not more than, the 'what', this book is going to be a small mountain of inspiration in a large-format hardcover.

Overall, I was very impressed by this book, and very glad to have had the opportunity to read it. I am a frustrated creatre-creator without the resources to take the images from my head and into the real world... so I enjoy it vicariously through publications such as these. They help me to keep my inspiraction high, give me ideas towards unorthodox solutions of other design problems, and just remind me that nothing is impossible if you have the right tools and some imagination. An excellent book indeed - typical of Weta.

When Cyril, Anthea, Robert, Jane and their baby brother go digging in the gravel pit, the last thing they expect to find is a Psammead - an ancient Sand-fairy! Having a Sand-fairy for a pet means having one wish granted each day. But the children don't realize all the trouble wishes can cause. This is a timeless classic with an introduction by Quentin Blake, award-winning illustrator and first-ever Children's Laureate (1999-2001).