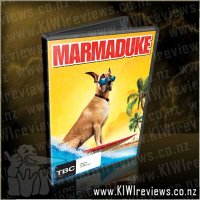 When Marmaduke (Wilson) moves to a new neighbourhood with his family, the super-sized teenage dog soon discovers he just doesn't fit in - literally! But, with the help of his best pal Carlos the Cat (Lopez) and some newfound four-legged friends, Marmaduke may just get out of the doghouse, fall in love, and surf off into the sunset.

I absolutely love this movie and have watched it with my daughter several times after buying it for her a couple of years ago. She absolutely loves movies about animal especially talking animals!!

I absolutely love the way this movie starts with Marmaduke showing how he had outgrown his home as he grew from a small puppy into a huge great dane. The way he shows how he interacts with the family through from taking the little girl for a walk and how he will listen to the little girl rather than the dad is so cute and I imagine would probably be the way a dog would really think.

The storyline is nice I always like a storyline where the little guy wins against the bullies like the turtle and the hare. When Marmaduke first moved he didn't fit in with the pedigree dogs in the park and so became friends with the non pedigree animals and was bullied by the pedigree dogs who thought they ruled the park. Marmaduke was not a dog who was willing to give up though and after abandoning the friends who were there for him from the start to be one of the top dogs he soon learnt that he should be loyal to his true friends. So he made the park a place where all dogs were equal.

Although Marmaduke was clumsy and was always making mistakes around the house with his humans, when he went missing and got into trouble in a dam his owner risked everything to save Marmaduke as he realised just how much Marmaduke meant to him. It was definetly a happy ending for all with Marmadukes owner realising that family is more important than work.

I started watching this movie with the thought of "Oh great! Another talking animal movie" and came out at the end of it with a smile on my face.

I have to give the Producers thumbs up for the line up of the cast that did the voices for the animals. I particularly thought that the voices of Marmaduke (Owen Wilson) and Carlos (George Lopez) were well suited for their roles.

They could however have done a better job on the animation of the animals talking, but you know what... I think I am just nitpicking a little. It was a very entertaining movie to watch.

Overall I would say that this is a great movie for the younger children and may appeal to the adults young at heart.

One day in 2003, in the lead up to the Iraq War, British intelligence specialist Katharine Gun receives a memo from the NSA with a shocking directive: the United States is enlisting Britain's help in collecting compromising information on U.N. Security Council members to blackmail them into voting in favour of an invasion of Iraq. Unable to stand by and watch the world be rushed into war, Gun makes the gut-wrenching decision to defy her government and leak the memo to the press.