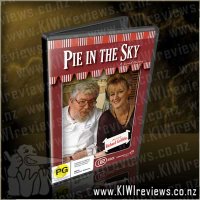 Disclosure StatementFULL DISCLOSURE: A number of units of this product have, at some time, been supplied to KIWIreviews by the company for the purposes of unbiased, independent reviews. No fee was accepted by KIWIreviews or the reviewers themselves - these are genuine, unpaid consumer reviews.
Available:
November 2010

Pie in the Sky - A Second Helping product reviews

Semi-retired policeman Henry Crabbe (Richard Griffiths) would rather be cooking than catching criminals.

Unluckily for him, he happens to be good at both. His boss, Assistant Chief Constable Fisher (Malcolm Sinclair) doesn't want to lose him, and his accountant wife, Margaret (Maggie Steed), worries his new career as a restaurateur won't be financially viable.

While indulging his culinary passions, Crabbe remains on call for those particularly tricky cases that Fisher sends his way. Larger than life as he is, sometimes there just doesn't seem to be enough of Crabbe to go around.

What can be said about Richard Griffiths and his acting? I dont recall seeing him outside of pie in the sky although I have heard his name a lot and believe he was in Harry Potter, I still cant place him. I dont really recall seeing any of the actors but they work fantastically well together.

There is two very different parts to this series; the police force fairly straight forward do your job bit with its mix of people and the restaurant with its warm homely setting were they all seem to get on like family. Of all the people, I really like Sophia Cambridge with her accent and mannerisms and Steve. He fits so well in the kitchen and is the center of the restaurant with being a chef, although he is not the chef.

Although it seems to be filmed or costumed in the 70's the music and background noises are at a comfortable level so that you can still hear and follow the main conversation without struggling. I really like the title music and it instantly makes me wonder what restaurant dramas will happen and what the case in the police force will be.

I would say that an older audience would really enjoy this but there is definitely room for the younger people as well. I didnt find it humourous but it did have its moments of making me laugh.

Based on Denis Glover's poem, The Magpies, Skin Tight tells the story of the enduring love and life of Tom and Elizabeth on a South Island farm.

A superb piece of physical theatre, Skin Tight has won high praise in New Zealand and the United Kingdom. Performed by Danielle Cormack and Jed Brophy.