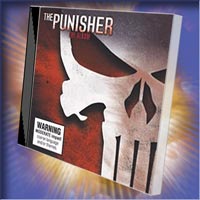 Disclosure StatementFULL DISCLOSURE: A number of units of this product have, at some time, been supplied to KIWIreviews by the company for the purposes of unbiased, independent reviews. No fee was accepted by KIWIreviews or the reviewers themselves - these are genuine, unpaid consumer reviews.
Available:
June 2004

The Punisher is not only going to be one of the biggest movies of the year, it's going be one of the best soundtracks. Based on the Marvel Comics character, who first reared his head in the Spider-Man comic 25 years ago, the Punisher, played by Thomas Jane, is undercover FBI agent Frank Castle.

An ex-member of the Delta Force Ops, and later as a special agent who's beat considerable odds to survive, Castle has seen too much death and opts for a safe desk job so he can lead a normal life with his wife and son. But when his family is executed in a brutal mafia-style slaying, by ruthless businessman Howard Saint (played by John Travolta), Castle seeks his own revenge, taking to the streets to punish the guilty.

The Punisher soundtrack is a killer serve of heavy-hitting tunes, that's going to be a staple for any hard-rock fan, with tracks from Drowing Pool, Queens Of The Stone Age, Chevelle, Seether, Finger Eleven, Hatebreed, Damageplan and Jerry Cantrell, Trapt and a combined track, 'The End Has Come' from Ben Moody (Evanescence), Jason Miller, and Jason Gong Jones (Drowning Pool) plus loads more.

The album also includes the forthcoming single by Amy Lee of Evanescence and Seether, called 'Broken'. A gutwrenching and powerful tune that combines Amy's sublime vocals with those of boyfriend Shaun Morgan's, 'Broken' is an absolutely knockout track with an awesome video, that Evanescence fans are going to love.

Living to Write the End
Rating: 8.0

It's a powerful line from "Time for People" by Atomship, expressing a sentiment I see in increasing frequency in the world around me... although I wouldn't always say it can be seen to such a strong degree. (After all, there aren't THAT many shooting spree's in NZ.)

I admit to be rather underwhelmed by the hype for the movie itself, it just looks 100% 'Hollywood' and those sort of 'action movies' don't appeal to me much, but the soundtrack is full of hard hitting rock... much more to my liking. I found the same thing with the 'Spawn' movie and soundtrack - awesome soundtrack, mediocre movie. Let's hope 'The Punisher' doesn't follow that trend.

Of the more notable tracks on this album, 'Broken' - the upcoming single by Seether, featuring the stunning vocal talent of Amy Lee (from Evanescence) would have to be right up there, along with 'Time for People' with it's powerful lyrics and strong melody, and I was also taken with the ballad-like 'In Time' by Mark Collie. Track 2, 'Bleed' by Puddle of Mudd also warrants a mention in the 'Good Stuff' section.

The only down-point I found was track 4 ' Never Say Never' by Queens of the Stone Age... it's a particularly uninspired remake of a 'Romeovoid' classic, circa 1981, and I didn't particularly like it back then either. When will people learn...

Overall, 19 tracks, 5 greats, 1 dud, the rest are good listening but nothing to write home about. Still good value for the money, and there are bound to be those who will drool over more tracks than I did. Another good soundtrack for the collection.

Need a little more Franz in your life? The Scottish rockers release their first-ever two-disc DVD which not only includes live performances from across the globe (including Australia & NZ), but also stacks of very special bonus features including behind-the-scenes footage and karaoke films!

The first disc features tracks drawn from high-energy live performances including much-lauded shows at T in The Park, Glasgow Barrowlands and the ... more...