The Shallows: How the Internet is Changing the Way We Think, Read and Remember review 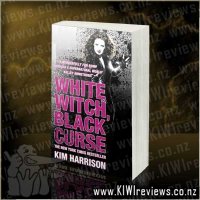 Rachel Morgan, kick-ass witch and bounty hunter, has taken her fair share of hits, and has broken lines she swore she would never cross. But when her lover was murdered, it left a deeper wound than Rachel ever imagined, and now she won't rest until his death is solved... and avenged. No matter the cost.

Yet the road to hell is paved with good intentions, and when a new predator moves in to the apex of the food chain, Rachel's past comes back to haunt her.

The seventh and penultimate title in the "Rachel Morgan" series, this where things start to get REALLY tough for Rachel Morgan... as if the rest of her recent life wasn't bad enough. Her boyfriend is dead, she thinks she may have been there at the time, doesn't know if she's been bound to the killer or not, has her boyfriend's living-vampire ex as a flatmate, has trust-issues with her resident pixie, is part of a were-wolf clan that's wrapped up with an ancient curse that can trigger a civil war between the vampires and werewolves, has a pact with a demon, owes another demon a favour, and on top of all that, is now shunned by all witchkind!

Somehow Rachel must navigate through this utter minefield of a life, and keep her head above ground long enough to try and save herself from an eternity of suffering in the Ever-after... a realm out of time, yet somehow still linked to the here-&-now of the world we know. And that's the bit about Kim Harrison's writing that really impresses me... her world IS this world. A slightly different thread in the tapestry that is the multiverse, for sure, but still it feels like it's a plausible world. The details are brilliant... enough to give the world a real 'texture', but not so much that it comes across as trying too hard.

Overall, another stunning title, and I am now even more convinced Kim *must* write a 9th title... there are still too many loose ends, especially now that I have read the whole series and see threads that are still hanging loose and need to be addressed. Pretty please?

"Did you think Slappy here was talking?"

Ray Gordon loves to scare his younger brother, Brandon. It's not hard considering Brandon is terrified of everything - loud noises, rollercoasters, and especially the wooden dummy, Slappy, that Ray got from the HorrorLand gift shop.