ProdID: 2694 - For a Few Demons More
Written by Kim Harrison 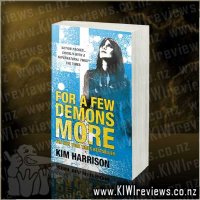 Bargaining with demons has left Rachel Morgan in constant danger of losing her soul.

As if being famous in the underworld - for all the wrong reasons - and sharing her home with a vampire and her jealous girlfriend didn't make her vulnerable enough, one night Rachel finds demons ransacking her home with no fear of sanctified ground. They are searching for something they believe Rachel to possess - a danger that Rachel thought was well hidden and secret.

But when the human morgue starts to fill up with partially-turned lupine women who have been brutally murdered, Rachel realises that someone else knows the Focus still exists and that she may have been betrayed.

Fifth in the "Rachel Morgan" series, this book starts with a cliffhanger, and stays there the whole way through. If life was tough for Rachel Morgan before, it's almost hell now... Newt is interested in her, and Newt is someone you want overlooking you, totally... you see, Newt is insane... amazingly powerful... extremely ancient... oh, and did I mention that Newt is also insane? Add to that the fact that Newt is the oldest living Demon, and you can begin to see Rachel's problem.

The telling is flawless, the world amazingly detail-filled and utterly believable, and the 'science' of magic so well thought out that it doesn't seem out of place when characters make casual mention of strange and esoteric things, such as why there are three 'flavours' of magic, the strengths and weaknesses of each, etc. You just can't help but fall into this world, and wonder if maybe it isn't quite as fictional as you hope. This, for me, is a hallmark of a talented author in their prime.

Overall, this is one seriously stunning continuation of the story... I would love to rave on about all the bits I really enjoyed... but to do so would spoil the plot for those who want to read it but haven't yet. You should. If you like fantasy, you'll love this. It's gritty... the fairies aren't soppy, the pixies carry swords, and the witches have faces you wouldn't think unusual in public. The only cliche that stays true is that the demons ARE the bad guys... from a certain perspective.

I, Geronimo Stilton, was called to the Kingdom of Fantasy for the ninth time. Blossom, Queen of the Fairies, had disappeared, along with three powerful magical objects: The Book of a Thousand Spells, the Crystal Sphere, and the Whispering Wand.

If those objects ended up in the wrong hands, they could destroy the whole realm. Accompanied by new, magical friends, I had to cross horrifying kingdoms full of spiders and snakes before facing a terrible evil wizard. Squeak. Could I make it in time to save Blossom and the entire Kingdom of Fantasy.