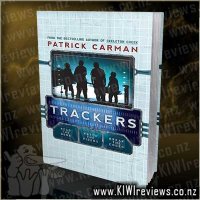 In the 21st century landscape of bits and bytes, everyone leaves a digital footprint... even the most advanced cyber criminals. And that's where the Trackers come in.

Four tech-savvy kids armed with high-tech video cameras and esoteric coding skills, the Trackers can find almost anyone, anywhere. Told through a collage of videos, text, and websites, Trackers #1 follows Adam, Finn, Lewis and Emily as they become entangled in a high-tech, high-stakes game of cat and mouse with Shantorian, the world's most dangerous hacker.

At least, that's who they think they're tracking...

Colorless Tsukuru Tazaki and His Years of Pilgrimage
Rating: 10.0

Trackers is about four young teenagers that go on field tests to try out new technology created by the mastermind behind the Trackers, Adam Henderson. Their work is mere childsplay, but when two mysterious people start using some of Adam's technology to contact them, all the pretend work soon becomes real when they are given a daring challenge, to track down a criminal that has the power to shut down the internet forever.

The one thing I have to say about this book is that it had so much action and danger in it that it blew my mind into a million pieces. Out of all the books on my "to read" list I think I was right to choose this one as the first book to read as it made my heart pump twice as much as it usually does, in fact I could hardly take my eyes off the pages. After a while I couldn't help but check out the Trackers website to see the video footage that it had to offer, but that wasn't the half of it.

The book told of a game called the Glyphmaster that used a language created by Adam and a bunch of other kids called the Glyph, and I found the Glyphmaster on the website! As soon as I found the game I plunged right into it, it was almost as if the Trackers were real, in fact the book author Patrick Carman, the author of the 5th book of the 39 Clues series, made the story fit in with reality so well that it made it seem real.

I'm glad that that this is the first of a series since the more books they put on the shelves the more stuff they put on the site and then I'll be able to follow the Trackers more. Book one is probably the coolest book I've read so far, and I'm sure you'll like it too, so get yourself copy and let the adventure begin.

Jungles come in many forms: there are the steamy rainforests of the Burmese highlands; then there are the lies, deceit, and betrayal of the world of covert operations; and there are the dark and twisted thoughts of a man bent on near-global domination.

To pull off their latest mission, Juan Cabrillo and the crew of the Oregon must survive them all.