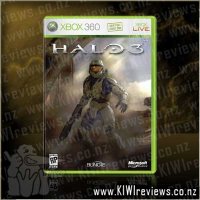 The epic saga continues with Halo 3, the hugely anticipated sequel to the highly successful and critically acclaimed Halo franchise. In this third chapter of the Halo trilogy, Master Chief returns to finish the fight, bringing the epic conflict between the Covenant, the Flood, and the entire human race to a dramatic, pulse-pounding climax.

Features:
• Next-gen advantage: Taking full advantage of the power of Xbox 360, Halo 3 expands on everything that has made the Halo franchise great, adding a wealth of technical and gameplay advancements.
• Evolution of design: Next-generation high-definition visuals, enhanced A.I., an advanced real-time lighting engine, and new weapons, characters, and challenges are just a few examples of Halo 3's evolution of design and technology.
• Unparalleled experience: Ultimately, these improvements provide gamers with an unparalleled experience and, in the end, tell an even more compelling and engrossing story.
• Online multiplayer: Working in concert with Xbox Live on Xbox 360, Halo 3 builds upon the unique social multiplayer experience and innovative, evolving online gameplay of Halo 2.

What a way to end the trilogy. Master Chief and Cortana are back again, to end the war with the Covenant once and for all. Finally making it onto a next generation console, the graphics are incredibly diverse, and much less repetitive than the previous two games.

As a casual gamer, I usually suffer with first person shooters, but Halo controls are easy to figure out, and very simple to become competent in. The story line was the part that I enjoyed the most in these games. The different alien races, and technologies spanning over generations, creates an immense universe that piques your curiosity. I still hate "the Flood" with a vengeance. They occupy the most frustrating part of the game, but they are an essential part of the story line, and are unfortunately necessary.

Halo 3 is a rather short game, but it is action packed, and keeps you on your toes all the way through. With missions requiring a mixture of tactical shooting, vehicle manoeuvers, and flying, often under strict time constraints, this game provides challenging, but achievable game-play. I was sad to hear that the next Halo game would not feature Master Chief, but I know that this isn't the last that we will see of him, or Cortana.

As Halo was the flagship game for the Xbox when it first came out, so too was Halo 3 and I can easily see why. Halo 3 is a game that was made to Bungie's exacting standards of workmanship and gameplay and once again this comes out on top.

The graphics and environments are absolutely stunning and many times I found myself shot dead just because I stopped to look at part of the scenery.

This time around you don't have Cortana to guide you as she has been captured by the Gravemind a huge creature that is linked to the Flood. What you do have though is a... well sidekick is not quite the right word, more a partner, this time in the form of the Arbiter, you also get help along the way from his Elites. It turns out that your gonna need your help as there are more new Covenant baddies for you to face.

Also the AI is vastly improved on the first two games, but that's always the case when you have a more seriously powered CPU at your disposal.

While there are only nine levels in the entire game, each level is so vast and engrossing you don't notice the small amount of them.

I feel that this chapter is a fitting end to the Halo trilogy, but I couldn't help but wonder what the final cut scene was meant to imply.....

In 2001, Max Payne arrived to set the benchmark for action gaming, earning countless awards and revolutionizing the genre with cinematic combat sequences fuelled by the groundbreaking use of slow motion and compulsive narrative-driven gameplay. Now, working together with Rockstar Games' New York-based production team, Remedy has combined Max ... more...