My Dream : Listen to the Children review 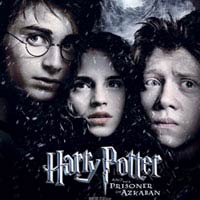 Harry is growing up, and so are his powers, and he's not always able to control them. So it's back to Hogwarts for another year of school... but Sirius Black, convicted murderer, has escaped from Azkaban Prison, the first to ever do so. And word is, he wants Harry. But is that really so? And just what IS a Hippogryph?

The Prisoner of Azkaban was my favourite book of the series when it came out, and for a couple after, so I was really excited to see it as a movie.

There are some well done, spooky moments in this movie, from when Harry runs away from home and sees an ominous dog to getting told to avoid Sirius Black to the end scene, so easy to see that Harry, Ron and Hermione are all growing up, and fast. Harry learns a lot more about his past in this book, but also learns the huge lesson that everything wasn't as it seemed when Voldemort was in his prime, a very important lesson for Harry to learn.

Emma Watson has really come far and does a fantastic job in The Prisoner of Azkaban, she's really coming in to her own, never been afraid to be herself, the kind of role model I want for my kids. The adults do a fab job, as always, though it was strange getting used to a new Dumbledore, he did a good job of stepping into the role while being true to the previous Dumbledore and creating his own version (he would have done well as The Doctor ;) ).

If you've seen the first two Harry Potter movies then you need to watch this one too.

After reading the books several times, I was rather looking forward to seeing Book #3 as a movie, as it is my favourite book of the series... I was not to be disappointed with the movie version either.

Watching a far more confident Harry, a more relaxed / not quite so stuck up Hermione, and an older, but not that much different Ron facing their worst fears, finding adventure, and.. is that a hint of romance maybe starting to creep in there?? Well it was all thoroughly enjoyable and definitely a must see for Harry Potter fans, and even for those that just enjoy a very good mix of adventure, magic, and fun.

Of the Harry Potter movies so far released, I would have to say this was by far my favourite.

Harry is older, wiser, and has quite a bit of Magic under his belt... more than he realised. His friends are older, and are starting to reveal a few secrets of their own. How does Hermione manage to get all that classwork crammed in? Why does Ron blush whenever she comes near, and what's with Harry and his Defence from the Dark Arts teachers?

I happily sat in the dark, in a brutally comfortable chair, and got lost in the big screen. It's a hard job, but...

Overall, have already made plans to see it again, well worth it.

Young American dancer Susie Bannion arrives in 1970s Berlin to audition for the world-renowned Helena Markos Dance Co. When she vaults to the role of lead dancer, the woman she replaces breaks down and accuses the company's female directors of witchcraft. Meanwhile, an inquisitive psychotherapist and a member of the troupe uncover dark and sinister secrets as they probe the depths of the studio's hidden underground chambers.