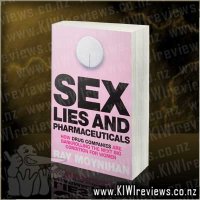 Hard-hitting and provocative, this powerful expose of the birth of a new 'disease' - and the multi-million dollar machine unleashed to market it - takes us inside the corridors of medical power, from Paris to Melbourne to Manhattan, to witness the creation of 'female sexual dysfunction' as a 21st century epidemic.

The characters in this corporate thriller are the global drug giants, the doctors and psychologists working with them, and the critics trying to untangle medical science from marketing who argue the new disorders or desire are a misleading and dangerous distraction from the real problems in sexual relationships.

With claims that nearly one in two women suffer from 'female sexual dysfunction', some of the most profitable corporations on the planet are poised to exploit some of women's deepest fears with hopes for new billion dollar markets.

Set against the great cultural contradictions of our time - increasing sexual liberation coupled with seemingly increasing sexual anxiety - Sex, Lies and Pharmaceuticals explores with compelling clarity what is really happening as the world prepares for the 'pink Viagra'.

I love books like this. By nature of my profession (a naturopath) I am meant to be anti-Big Pharma. However, I tend to be more of a fence-sitter with both legs dangling over the edge into natural medicine.
There is no doubt that Big-Pharma has its place in society, especially when they are doing good for society (and there are indeed many useful and helpful drugs, but now the wheel is turning into more 'recreational drugs' for want of a better and more accurate word than the 'lifestyle' medications they prefer to espouse. Viagra has been sold to help men, but it is now being sold as a recreational drug to those who want it, but don't really need it. The same with some of the competitor drugs (not wanting to leave those out) but what was there for women?

Now Big Pharma are looking at the lifestyle drugs for women. Drugs for which there is actually no disease, and so diseases get invented to sell drugs. This is not a new concept, but one that is being exploited more and more. It may be a cynical comment from me, but look at the facts: It wasn't long ago that a drug company suggested that women stay on the pill for 3 months at a time so they only menstruate 4 times a year, thus turning natural bodily functions into a disease. With some facts to back up that a few years ago women would be pregnant most of the time, now they are not and one sees more anaemia - from over-menstruation and lack of pregnancy. Clever marketing that!

Moynihan has now written an exposĂ © on how female sexual dysfunction is the new market for the drug companies. A few short years ago, there was no such disease. And now with the disease having been described, there is now a rush to corner the market in this area. First one out with a drug gets all the glory. But more important than that is the point that no researcher has found centres in the brain that govern arousal or desire - so how can one develop a treatment to a 'problem' that may never have a causative centre? I guess in short, it will be an expensive placebo action.

The author argues that there is a big pharma 'sponsorship' of female sexual dysfunction, as there is with many other diseases - diseases invented purely to sell drugs. Many naturopaths will argue that many 'normal' diseases a couple of generations ago have now been turned into life-threatening diseases for which a supply of vaccinations or pills are needed.

Without giving too much of the book away, I do urge reader to pick up, read and digest. Make your own opinions. Disagree with me, or the author if you feel so inclined, but read it you must. The Author makes some compelling arguments to state his case.

Doggy ditties, rather witty
about a kid's best friend;
a crazy collection, a silly selection,
from A through to Z at the end.

Anybody's who's ever had a dog - or yearned to have one - will love this A-Z of ditties about lots of different breeds of dog.