« Boy vs Beast - Battle of the Borders review 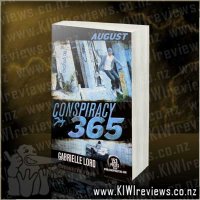 Boges and Winter are frantically trying to find him before it's too late. Meanwhile, Gabbi - Cal's comatose little sister - has been kidnapped, and he is the prime suspect! Some seriously daring and dangerous tactics are needed to save her this time...

The clock is ticking. Any second could be his last.

Callum Ormon has been warned. He has 153 days.

The Other Typist
Rating: 6.8

Attack of the Shadow Smashers
Rating: 10.0

Okay once again we have Cal in another life or death situation and once again he manages to escape relatively unscathed. As you might guess the deadly cliff hanger situation and escape that comes with each book is starting to get a bit monotonous, it's not the actual way that he is put in danger each time, more the fact you can almost guarantee he will end up in danger, and then he will get out of it in the beginning of the next book. Now in having said that, they have managed to switch it up this time and it has made a pleasant change.

This time Cal is hunting for a new item, his sister who has been kidnapped and of course he's been blamed... This has made and interesting turn of events and has made Cal even more determined as this time his sister is in even more danger that she has ever been before. I felt that this was exactly the kind of mix-it-up that the series needed at this stage.

As in all the previous titles, we are again brought into the almost-daily life of a teenager on the run, wrongfully accused of all sorts of horrendous crimes and deviant deeds by the real criminals, who are intent on either catching him alive to dig information out of him, or killing him outright to remove him from their plans.

This instalment starts with Cal in a predicament that haunts a lot of people - being buried alive. Compared to some of the situations this lad seems to find himself in at midnight on the last day of every month, this one may seem less horrific, but ask anyone who's ever been trapped in a small space and they'll tell you it's horrific.

The big twist this time around is that at the end of this book, Cal isn't the one who's in the worst danger! It really does make a nice change from "The Miraculous Houdini Kid" act from the previous seven titles. His comatose little sister, Gabbi, has been kidnapped and this volume is devoted almost entirely to his efforts to find and rescue her. There's a little bit of clue-hunting and a couple of small revelations, but it's mainly about the hunt for Gabbi.

Overall, another good addition to the storyline, with just as much in the way of thrills and tension as the previous books in the series, and the nice change of pace has kept it fairly 'fresh' in the face of a storyline that is so full-on that it risks running thin in places.

With only four months to go, the adventure is certainly stepping up a notch for Cal Ormond. This month, his sister has been kidnapped and he will do anything to get her back. It certainly doesn't help that the police are idiots and his own mother doesn't believe in his innocence.

Conspiracy 365 is an interesting enough story, despite it's repetitive cliff hangers, which I have come to accept will be present at the beginning and end of every book. It is a fast read, most suitable for upper primary / intermediate boys. There is plenty of excitement, stunts and situations which would look amazing as an afternoon television series. Within this target market, I would wholeheartedly recommend the book, though it may be a bit too scary for a much younger reader and a bit lacking in complexity for one much older.

Sssh ... NOT for parents! You can keep a SECRET, right?

Clara and I have a herd of tiny, talking, whizzie-whooshy, flying horses - and they're REAL! It's true.

Those naughty Miniwings get us into so much TROUBLE! Who would have thought a computer game could lead to such classroom CHAOS!

With illustrations by Kirsten Richards