Home > Categories > Books > Fantasy > The Good, The Bad and the Undead review

ProdID: 2651 - The Good, The Bad and the Undead
Written by Kim Harrison 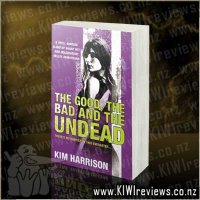 The Good, The Bad and the Undead product reviews

During the last few months, former bounty-hunter Rachel Morgan has been rather busy. Having escaped relatively unscathed from her corrupt former employers, she's not only acquired a vampiric room-mate called Ivy, faced werewolf assassins and battled shape-shifting demons, but has also found the time to pick up a boyfriend (even if he is only human) and open her very own runner agency.

But cohabiting with a vampire, however reformed, has its dangers. Ivy's evil vampire ex-boyfriend has decided that he wants her back, and views Rachel as a tasty side-dish. To make matters worse, Rachel's demon mark is the ultimate vamp-aphrodisiac; one that works both ways.

The stakes are high, and if Rachel is to save herself and her room mate she must challenge the master vampire and confront the dark secrets she's kept hidden even from herself.

The second instalment in 'The Hollows' storyline, this title picks up a short while after Book 1 left off... our key character, Rachel Morgan, is now out on her own in a successful business partnership with her living-vampire friend Ivy and their Pixie backup Jenks. The opening chapter shows us that as usual, Rachel seems to make the worst of every good situation, but somehow manages to get herself out of the deeper puddles of.. erm, trouble... by some miraculous twist of fate, some quick thinking, and a good blip of magic at just the right time.

Once again Kim Harrison has managed to make a world different enough to enable the unbelievable to become commonplace, yet still close enough to the world as we know it that we can put aside the disbelief and throw ourselves into the story without getting a feeling of disconnection that some fantasy stories can foster if their worlds aren't well thought out and self-consistent.

I found myself utterly enchanted by the many braided plots in this tale... they made the whole book seem so much more like a narrative of the life of an occult private investigator, and less of a fairytale for adults... the little details like the interpersonal issues between many key players - Rachel, Ivy and Trent amongst the more significant ones - and the small hints at the big finale that seem oh-so-insignificant when casually dropped in, but which turn out to be so very revealing in hindsight, make for a rich tapestry of a tale, rather than an action-pack but otherwise flat story.

Overall, even though this is still very early in the series, it's shaping up to be a stunner of a saga indeed. Definitely not suffering from sequel'itis the way some other series I have read do. In some ways I would love to see this converted to a TV series, but another part of me would cry at the way it would inevitably be butchered in the conversion.

Rhi loves to sing but has no idea how amazing she is, especially since she split up with Max, who she still loves. Everything changes when a talent scout spots her performing at a wedding. Suddenly Rhi is in huge demand and promising to be a new music sensation. And on top of that, Max is doing everything in his power to win her back. But life is never that easy.