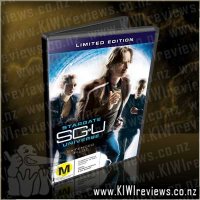 With extended scenes, the SG:U Pilot will launch you to a Stargate experience unlike any other.

A group of scientists, soldiers and civilians on a mission millions of light years from Earth find themselves under attack. In a desperate bid to save their lives, and the realisation of years of research, the senior scientist takes a gamble and dials the 9-chevron stargate address discovered in an Ancient database, opening a wormhole to an unknown destination, which turns out to be "Destiny" - an Ancient starship launched hundreds of thousands of years earlier, hurtling through space galaxies away from Earth, and no way home.

Now, isolated and with rapidly dwindling life support systems, their only hope of survival lies in their ability to work together. Pushed to their limits, the travellers explore the farthest reaches of the universe in a three-hour adventure that will excite and challenge your imagination.

Inside the Animal Mind
Rating: 8.3

I watched the first 3 episodes when it first screened here on TV. It didn't really hook me the same way the previous two series had. But that being said, I didn't not like it either, it was just different, more dark and gritty, kind of like what Torchwood was to Doctor Who, it's a more adult version of Stargate.

This was a big pilot, clocking in a 3 x 1 hour episodes (including adverts) even before they added an extra 12 minutes of footage, but the extra footage does make a few things a bit more clearer to understand and follow, especially when it comes to the 'crew' dynamic.

For those of you who are Stargate fans and haven't yet seen this yet (are there any left out there?) I must warn you this series is quite a departure from the standard. Whilst there are Stargates and exploration of alien worlds, this series deals more with the human element in the equation. Especially when you throw together a group of unprepared people and then ask them to both live and work together when they are located in a starship millions of lightyears from earth and with no way to get home.

While some of the characters take a while to develop, there are of course some which you just love to hate straight away. My personal favourite to hate (or at least mildly dislike) is Dr Nicholas Rush, I think that Robert Carlyle is an excellent actor and think that this character shows us just how good he is, as it takes a good actor to portray someone like Dr Rush.

Whilst I was a bit, shall we say, skeptical when I read the casting for this series, I feel that the actors chosen have taken the roles and made them their own and they do actually work.

So to sum it up, if you haven't seen any SG:U and you're wondering if it's right for you then watch this and it should help you decided to watch the rest of the season.

Horrible Histories returns to delight viewers with more gruesome events and ghastly characters from British and international history. Get ready for the funniest, fastest, nastiest and daftest ride through history you're ever likely to see.

Packed full of strange facts, rotten rulers, gory battles, crazy inventions and weird and wonderful moments from the past, Horrible Histories again covers every era from the Stone Age to World War ... more...