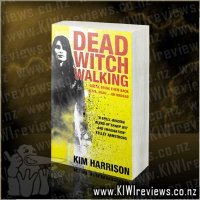 Forty years ago, a genetically-engineered virus killed half of the world's human population and exposed creatures of dreams and nightmares that had, until then, lived in secret alongside humanity.

Rachel Morgan is a runner with the Inderland Runner Services, apprehending criminals throughout modern-day Cincinnati. She is also a witch.

Used to confronting criminal vampires, dark witches and homicidal werewolves, Rachel's latest assignments - apprehending cable-stealing magic students and tax-evading leprechauns - have prompted her to break her thirty-year contract with the I.S. and start her own runner agency.

But no-one quits the I.S.

Marked for death, Rachel is a dead witch walking unless she can appease her former employers and pay off her contract by exposing the city's most prominent citizen as a drug lord. But making an enemy of the ambiguous Trent Kalamack proves even more deadly than leaving the I.S.

As the first book in The Hollows series, this is the one that starts it all off and sets the tone and pace for the series. Having already read what is apparently the last book in the series, this held few surprises for me in terms of the overall plot... there's something a little disappointing in reading a big cliff-hanger moment where someone looks certain to die, and already knowing they're going to make it... or not... and even how.

However, this is in no way the fault of the story, simply another case of discovering the series later down the plot track, and finding myself SO HOOKED I simply had to go back to the start to get more! (I had this same problem with another great series, The Saga of Seven Suns by Kevin J Anderson.)

In this glorious and auspicious start to 'The Hollows' series, our main character, Rachel Morgan, is just your average, beaten-down-by-the-boss lacky, being forced to take on the lamest of jobs because her boss is a nasty gimp... a vampire's playtoy and wannabe Major Player in the new power structure brought about by The Turn - the period of time when the mutated T4 virus, which had attached itself to a weak spot in the genome of an engineered tomato species called 'Angel', went wild and killed off enough of humanity that the 'paranormal creatures' that had been secretly sharing our world decided they were now numerous enough not to need to hide any more, and popped out to say "Hiya!"

I had to laugh at the subtle puns throughout the storyline - An avenging 'Angel' taking down over half the humans of the world, unleashing the nightmare'ish creatures such as vampires, witches, fairies and pixies, trolls and gargoyles... basically the biblical time of "The Rapture" - just not quite as the 'good book' had us believe. For the life of me, I just couldn't stop getting the mental image of a giant tomato with blazing wings and a flaming sword wandering the world smiting left and right...

Anyways, an awesome start to what is shaping up to be an awesome series. I should have had this review on the site 4 days ago, but I simply could not wait to get stuck into Book #2 - "The Good, The Bad and the Undead" - enthralling stuff indeed. A heady mix of magic and blood, tastefully arranged around a dedicated plot with plenty of thrills... even if they are slightly softened for me by foreknowledge of who's going to make it at the end.

Overall, if you like dark, gritty fantasy with no frills but plenty of thrills, you'll be smart to get out to your bookstores and find these books.

When Milly the cow looks up at the moon she knows it must be lonely, so she decides to keep it company. The other cows think she's crazy, but Milly continues trying to win the moon's friendship. But this is harder than Milly thinks. After all, how do you get the moon to share its secrets with you?

This is a beautifully written picture book from the author of Hill and Hole and NZ Post Award-winning Old Huhu. In simple but ... more...