Dream of Asarlai - 1 - Secret Ones review 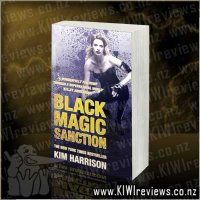 Rachel Morgan has fought and hunted vampires, werewolves, banshees, demons and other supernatural dangers as both witch and bounty hunter - and lived to tell the tale. But she's never faced off against her own kind... until now.

Denounced and shunned for dealing with demons and black magic, Rachel's best hope is life imprisonment - the worst, a forced lobotomy and genetic slavery. Only her enemies are strong enough to help her win her freedom, but trust comes hard when it hinges on the unscrupulous tycoon Trent Kalamack, the demon Algaliarept, and an ex-boyfriend turned thief.

It takes a witch to catch a witch, but survival bears a heavy price.

I once, naively, thought that the 'fantasy' genre wasn't for me. There are times, like this, I love being wrong.

The story is pretty clever, and though it is apparently the last in the 'Dead Witch Walking' series, it remains loose enough that Harrison could easily fit another title, or two, on the end to tie up the last of the loose ends. It simply did not feel 'closed off' enough to leave it here. (Translation from new-fan-speak: Please don't stop!)

The characters are very solid, which is to be expected at the end of a multi-title series, yet they don't rely on that prior experience being in the readers' mind - as proven by the fact that I totally enjoyed this story, despite my only other experience with this 'world' being a short story in an anthology late last year. Sure, the background events pop up, but they are well explained in context if not in detail.

We have the usual suspects in a fantasy plot: witches, fairies, pixies, demons, elves, vampires, mundane mortals... they all make an appearance, but in some unexpected ways. The pixies are good-guys, as expected... but fairies are nasty, elves are self-centred and basically evil, and demons are neither good nor bad - simply utterly self-interested and will stab anyone in the back if they think they can get away with it, but play by a fairly strict code of conduct. Talk about 'through the looking glass'!

I loved the explanation of the metaphysics that created the 'ever-after' dimension, and how ley-lines were/are created! My favourite character of all has to be 'Al' the demon - though he's a typical double-dealing demon... he's about the only character who never betrays his rules of conduct, and thus is really the only truly trustworthy character.

How's that for weird?!

Overall, a most excellent tale, and a series I am very sad to have missed most of. I can see much 2nd-hand-bookstore-roving in my near future as I try to collect the series in entirety. For those who enjoy a gritty, darker-than-rosy, version of the fairy mythos, this is a great way to explore it. Set in a 'modern world' where the mystic folk have returned to our world from the lost 'ever-after' dimension, it's similar to early tales in Laurel K. Hamilton 'Merry Gentry' series, or Kelley Armstrong's 'Eve Levine' books.

Brimming with honesty, heart and Jenn's patented sense of humour, it features top 10 lists, photos, screenshots, social media posts and never-before-posted stories chronicling Jenn's journey from an anxious middle-schooler just trying to fit in, to a YouTube sensation unafraid to stand out.