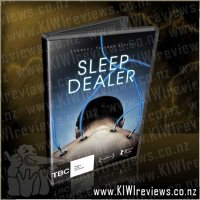 Set in a near-future, militarized world marked by closed borders, virtual labour and a global digital network that joins minds and experiences, three strangers risk their lives to connect with each other and break the barriers of technology.

This movie explores an all-too-likely future which takes our current trend for 'outsourcing call-centres' to a new dimension in which the workforce itself is outsourced to low-profit countries. There, workers are fitted with 'nodes' - small interface plugs that allow them to telepresence into robot chassis anywhere in the world via a glorified internet system. A labourer in Mexico can build a skyscraper in New York, or mine ore from a sub-sea trench off the coast of Africa, or be a Nanny for some kids in Europe. The only thing missing from making this a reality is the interface plug technology. The rest is simplicity itself.

The movie has strong pre-cyberpunk feeling to it, just with a 'dirtier' tone caused by the focus being in Mexico and in the early stages of the total-immersion telepresence technology. William Gibson would probably appreciate the irony of this movie, especially the character connection formed between the lead character, Memo, and his good-intentioned stalker.

Overall, despite being really hard to put on as 'secondary input' while typing and testing Photoshop CS5 because it's almost exclusively in Mexican/Spanish, with an odd drop of English mixed in (and even then, usually drowned out by the inline translator Memo has to use), I found the movie quite thought-provoking and enjoyable. If a version was done with an English soundtrack, I think it would appeal to a wider audience, but it would certainly lose a lot of it's gritty and honest texture. One to appreciate for those willing to persevere.

Host and author of the international best-seller Cracking the Da Vinci Code, Simon Cox, takes you on an in-depth journey through the heart of the mysteries behind Dan Brown's best-selling novel, The Da Vinci Code.

This comprehensive documentary cuts through the confusion, ultimately cracking Da Vinci's code and revealing the remarkable truth behind the legend of the Holy Grail.