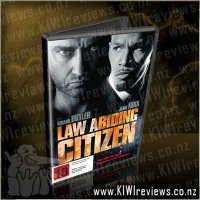 When a home invasion robbery turns deadly, the lone survivor will stop at nothing to avenge his lost loved ones in Law Abiding Citizen, an explosive examination of blind justice from the director of The Italian Job.

Clyde Shelton is an upstanding family man whose wife and daughter are brutally murdered during a home invasion. When the killers are caught, Nick Rice - a hotshot Philadelphia prosecutor - is assigned the case. Nick offers one of the suspects a light sentence in exchange for testifying against his accomplice.

Fast forward ten years. The man who got away with murder is found dead and Clyde Shelton coolly admits his guilt. Then he issues a warning to Nick, either fix the flawed justice system that failed his family or key players in the trial will die.

DVD Special Features
•  The Justice of Law Abiding Citizen
•  Law in Black and White: Behind the Scenes
•  Theatrical Trailer

My husband really wanted to see this and after it being delayed for a few weeks we finally borrowed it and sat down to watch it with a bag of chips and dip.

The basic plot is that a man sets to reap justice upon those who helped the murderers of his wife and child escape fro being sent to jail. Slowly one by one they die. I really enjoyed the mind play in this movie, if done well I can sit still for the whole movie, only problem was that when it got towards the end, it crashed and burned taking it from a must own to a might watch it again.

The actors did a good job but I don't feel there was really any hard work there for them to do with such a simple plot line. Had the ending been handled better this could have been one heck of a movie, instead I'm left feeling cheated out of my money.

good for if you want some mind twisting and action, but if you're after a good ending, don't bother.

Take a really good plot, add some gruesome deaths, a corrupt and self-centred justice system, a couple of immoral criminals, stir in some seriously black-ops type planning and a few good twists and turns, and you have... the nightly news.

This movie has so much potential, right up until the last half hour or so. I was riveted... then felt like I had been sucker-punched in the gut when the ending fizzled out into a flaccid droop when it could have been an eruption of mind-gaming brilliance.

Throughout the movie, the lead character, played by Gerard Butler, reminded me of a younger and more rugged Hannibal Lecter in his ability to twist minds, situations and seemingly reality itself, to achieve his goals and kill off every one of those who played a part in the travesty of justice that was the trial of the two men who raped and murdered his wife and young daughter... then right at the very end it suddenly got very predictable and more than a little disappointing.

Now, in fairness, both Butler and Foxx played their parts expertly, with no effort required to really believe in their characters... and I suspect that played a big part in why the movie was so disappointing. If it were harder to connect with them, the limp ending would have been more tolerable and felt less like a broken promise of better. This was definitely a failure in the writing, not the acting.

The acting was pretty spot on, the special effects - though subtle in places - were realistic enough to give me the bejeebers during some of the more 'bloody' scenes. A lot of the really nasty stuff was implied rather than clearly shown, which is a pretty good thing really, considering one of the scenes is seriously icky! "Now, I'm going to start with your eyelids..."

Overall, though the greater majority of the movie is pretty good indeed, the ending is limper than a 3 week old salad. If you sit down expecting a good action flick, you'll be happy with what you get... if you want a stunning ending, then you won't be quite so happy.

During the 1996 Summer Olympics in Atlanta, security guard Richard Jewell discovers a suspicious backpack under a bench in Centennial Park. With little time to spare, he helps to evacuate the area until the incendiary device inside the bag explodes. Hailed as a hero who saved lives, Jewell's own life starts to unravel when the FBI names him the prime suspect in the bombing.