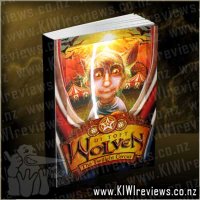 Nat Carver and Woody - his hairy shape-shifting friend - have escaped from barking-mad werewolves and scientists, and joined the Twilight Circus of Illusion.

But the boys are far from safe...

Soon they're caught up in a terrifying new mission against an evil black-widow vampire...

Tortall and Other Lands
Rating: 9.3

The awesome story of Nat Carver and his furry shape-shifting friend, Woody,continues in this all-new sequel. Well people I must say that this book was AMAZING! I thought that the book was filled to the brim with explosive action, with a little bit of scariness thrown in, a pinch of amazement, and topped with a thick layer of supernatural madness. As I mentioned in my review for the first book, I was absolutely thrilled to find out that there was more to the "Wolven story" than I saw in one book; and by the looks of the ending I'd say that There could be plans to publish a third book because of the story-hanging ending, so here's hoping there is.

I thought the most mind-boggling thing that happened in the story was when Nat turned into a wolf as it was something that I was waiting to happen, so when I read that part of the story I was wide-eyed with excitement.

When I look at the book overall, rather than just a single page, I don't really think that there was anything in the storyline that was all that bad. I think that this book would probably be suitable for all ages and I think that it is too good to resist (the book that is). Unlike book #1, I thought the book was good from the first chapter to the last, the other story on the other hand was quite slow at the start but got better by the chapters, so I think that this one is a big improvement. "The Twilight Circus" is a great novel that I'm sure you and your friends will enjoy.

A terrible war once raged between the two rival planets within a distant solar system. Over the centuries their human inhabitants had 'adapted' themselves to the extremely different conditions of their new homes, far outside Polity influence.

In the midst of this merciless conflict, one side encountered a bizarre object suspected of being a cosmic superstring employed as a new weapon by the rival side. Their attack on it caused the ... more...