The Wind in the Willows - Winter Tales review 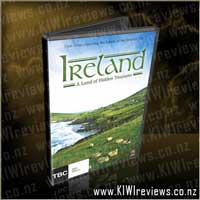 Ireland From The Air:
From its rugged coastlines to its vast panoramas of lush, verdant countryside, Ireland remains a land of scenic natural beauty. Set to the lilting strains of an original score composed by Brian Byrne and performed by the RTE Concert Orchestra, this stunning travelogue presents an unparalleled view of Ireland's breathtaking landscapes through exclusive aerial photography of picturesque sites such as medieval castles, towering sea cliffs, bucolic villages, and, of course, those famously pastoral hillsides.

Irish Country Manors:
Magnificent, intriguing, cherished or forlorn, the fortunes of the Irish Country House offer a unique insight into Ireland's history. Shot at over forty locations all across Ireland, this film celebrates this heritage and charts its development, from the earliest cliff-top castles and fortified houses to the great Palladian mansions, giving an unparalleled view of one of Europe's richest architectural assets. These remarkable buildings in their idyllic landscape settings are a vital part of Ireland's historical and artistic heritage. The Irish Country House is narrated by Anjelica Huston.

Journey Of The Celtic Legends:
According to legend it's the first of May that the Tuatha De Danaan, a holy people from the isles of Septentrion, arrived in Ireland, carried on a cloud. Three thousand years later this founding mythology of Celtic culture will give birth to the legend of King Arthur and his knights of the Round Table - their exploits continue to feed the collective imagination of the West to this day.

Island Life:
It's said on the mainland of Ireland that to live on the island of Tory, you have to be a little bit mad! On that island legend claims that there are fairies, leprechauns, wishing stones, interred Indian princesses and even a Cursing stone with deadly powers. Island Life is both enormous fun and an informative documentary featuring the last King of Ireland and his loyal subjects, including the very mysterious Dougie the Dolphin!

Although not the most riveting documentary I've watched, I found most of "Ireland: A Land Of Hidden Treasures" to be quite informative and interesting. My least favourite of the 4 discs was "Ireland from the Air", which I found slow and rather boring, in comparison to the others. Sure, the scenery was amazing, but then how could it not be... it was all Irish scenery after all! The background music was quite lovely, if not slightly haunting, and definitely had an Irish feel to it... making it ALMOST easy to ignore the somewhat droning tone of the narrator. This is where it really became a struggle for me to keep watching this particular disc. For most of it, it's simply scenery rushing past, while the narrator drones on, (and on, and on...) about the history of Ireland, in a way that made me think of being back in school and struggling to stay awake in a lecture. At least the other discs all contained brief interviews with various "important people" to help keep things interesting... Ireland from the Air was the only one NOT to contain anything like this!

The second DVD, "Irish Country Manors" takes you on a fantastic journey through the history of Ireland's architecture, including everything from some of the most amazingly decorated ceilings I've ever seen, beautifully maintained HUGE gardens, rooms that would hold an entire house by today's standards... to gorgeous gothic castles, crumbling ruins, and even the odd temple. The narration done by famous actress Anjelica Huston was enjoyable to listen to, as well as informative without the feeling of being overloaded with drivel, and her love for the country she grew up in was clearly evident.
When I first read the blurb for this particular disc, I'd thought it was going to be rather bland and boring, but found myself pleasantly surprised as I learned about the beauty of Irish architecture (seriously, I never thought something as simple as a ceiling could be so stunning!). Learning how so many Irish manors and castles have been lost, through fires or simple neglect was rather saddening, while others have been rescued and restored, then opened up for the general public to come through and learn the history, or turned into hotels... or as was the case of one where descendants of the original owners still lived in it, turned into a game park in an effort to keep up the constant (and rather expensive) repair bills. Definitely a far more fascinating film than I'd first expected.

Discs 3 (Journey of the Celtic Legends) and 4 (Island Life) were definitely my favourites of the four. 'Island Life' told of the peaceful life on the island of Tory, that would then turn rowdy and chaotic at night when everyone went to the pubs to sing and dance with the last King of Ireland. Fishing, art, friendship, music, and a laid-back view on life seemed to be what made up the lifestyle of those on the Island. There, they run on Tory time... where watches aren't worn because time just doesn't matter. My kind of place! The King welcomes all the newcomers to the island... even to the point of kissing any new girls that decided to visit. Definitely an unusual King, but one who very clearly loves his people and country. The only negative I would really have about this is that occasionally the narrator's accent made it a little difficult to actually understand what he was saying, but only a little, and after a while, I found I was able to understand him a little more easily.
Journey of the Celtic Legends, didn't cover the kind of legends I'd thought it would (ok, yes I was expecting more legends of the Tuatha De Danaan... more "fairytales" or myths), but instead touched on many many other snippets of Irish "legends". King Arthur, Saint Patrick, Saint Columba (who was involved in the early beginnings of copyright laws), the Guinness brewery, the origins of tweed, the blarney stone, even a quick run down of what each of the pieces in chess represent... these are all covered, amongst other things, in this dvd, and it covers not just Ireland, but also Great Britain and Brittany. Not what I'd expected, but thoroughly enjoyable and informative all the same.

I've always loved all things Irish... the scenery, the music, the people, the accent, the legends, etc... so this was a must-watch for me, and while I was disappointed in places, I enjoyed most of it, and definitely think I'll be watching parts of it again. As a 4 disc set, and with the amount of information packed into them, I'd say it's definitely worth the $39.99 too. If you're interested in Ireland and it's history, or even just the beautiful scenery and music, then this could be a DVD that would be worth adding to your collection, although maybe not the best for teaching kids about Ireland, as they may find it a bit slow and boring.