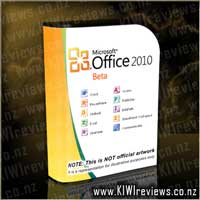 Disclosure StatementFULL DISCLOSURE: A number of units of this product have, at some time, been supplied to KIWIreviews by the company for the purposes of unbiased, independent reviews. No fee was accepted by KIWIreviews or the reviewers themselves - these are genuine, unpaid consumer reviews.
Available:
To download from the Microsoft Website

Microsoft Office 2010 offers flexible and powerful new ways to deliver your best work - at the office, at home or at school. Create standout reports and presentations with tools that help you capture your ideas more creatively.

Stay connected to your projects, even when you're away from your computer, with access to Office files via Web browser or smartphone. Work efficiently with others by sharing, editing and reviewing files at the same time - even across geographies and time zones.

With Office 2010, you're in control, getting things done and producing amazing results however and wherever you work best.

While Office 2007 was a profound change in design for those users used to the User Interface commonly used in all prior versions of Office, the changes in Office 2010 from 2007 are a lot less drastic, but are still quite important ones. For starters the Circular 'Office' button has been replaced with a simple 'File' menu which still does the same job, but is much more obvious as to what it does.

Also in this version of Office is the large integration of sharing and collaboration technologies such as SharePoint and SkyDrive.

Another change is the look of the user interface in Outlook, whereas Outlook 2007 retained the old style Outlook 2003 UI, Outlook 2010 now uses the new 'Ribbon' interface. This change now gives Office a more unified and complete experience (although it is still a bit of a learning curve like it was changing from Office 2003 to 2007).

Look and Feel
Independent research claims that more than 85 per cent of users like the ribbon interface in Office 2007 and only 2.4 per cent found it "significantly more difficult to use". While this is good news to Microsoft it hasn't stopped them from making even more improvements to the User Interface for Office 2010, including allowing the ribbon to be customised by the users. This should help those of you out there that had issues with the inability to change the 'Ribbon' interface in Office 2007.

All the applications have brand spanking new icons, emphasising a capital letter, however this may lead to some confusion between application such as PowerPoint, Publisher (and Project), however as long as you can remember to read the text associated with the icon, then this shouldn't be an issue (unless you are running Windows 7 and you have them pinned to the taskbar). Another wee change is the more subtle colour schemes in use than what was used in Office 2007, and the fact that the silver scheme is now the default rather than blue.

New common features
Another big change is the introduction of the 'Backstage' area which contains all the functions of the newly named 'File' menu. This now takes over the entire area of the application's window leaving only the ribbon tabs visible. This area contains a list of file related actions on the left such as Save, Open, New, Print and Share. The area on the right is used to display information about the document and big buttons of options. For example, all the Print options are now shown next to a real-time print preview of the document so you can quickly see how those options will affect the printed output.

Research by Microsoft has shown that after pasting data into an Office application, the most common action was to undo that paste because the data didn't format quite the way the user wanted. The new Paste Preview feature means that users can choose the format they want to paste the data in before they finalise it. Paste options on the right-click context menu will show you what the pasted data will look like in your document as you hover your mouse over the various possible options.

Common improvements
Another great change is the ability to perform simple colour/contrast/brightness adjustments on any images you insert into your documents from directly within the application. As well as this you can also apply artistic effects as well such as rendering as a pencil sketch (The thumbnails for these effects use the actual image you are manipulating so you can find the effect you want more easily). But wait there's more; you also get a simple background removal tool to cut an object out of its background.

Smart Art has also been given a bit of a tune-up as well with many new diagram types including organisation charts, perfect for when you need to whip up an org chart, but you don't have a copy of Visio installed, this feature is long overdue if you ask me. The context tab for Smart Art tools also gets new commands for adding and editing the individual shapes so you don't have to rely on editing the bullet point text all the time.

Office Applications: Word
In Word, the major change, besides 'Backstage' is the new Navigation Pane which combines features of the Document Map, Thumbnails and Find dialog in one pane. The Navigation Pane displays all the headings in your document and lets you jump directly to that text. It also lets you promote, demote or move headings, complete with their associated body text, and add new headings of any level anywhere in your document. This is perfect for documentation writing, doing your thesis or even writing your memoirs.

Also type a word or phrase in the Navigation pane and all the headings with text containing that word/phrase are highlighted as are all the matching words in the main body of the document. You can switch from headings to seeing thumbnails of all the pages, again with search terms highlighted or to show sections from the documents where matching text has been found.

There is also a new Accessibility Checker which can be used to ensure your document is easily readable by people with disabilities and new language tools which can give instant translations of words, phrases or documents.

Office Applications: Excel
The conditional formatting system in Excel has been improved with more available logical defaults and the ability for the user to choose individual icons from icon sets. There are also new tools for visualising data from the Excel worksheet including Sparklines and Slicers.

Sparklines produce miniature charts in a cell and show a single line or set of bars to summarise a range of data. You can highlight the highest and/or lowest values in each run of data and adjust the axes to be relative or absolute.

Sparklines are a great tool to use to summarise data that would look too jumbled in a regular chart. The newly improved Slicer controls let you visually filter data in lists/PivotTables making it more obvious what data has been included and in consequence making PivotTables a lot friendlier, and if these are combined with the new PowerPivot add-on from the SQL Server team even ordinary mortals could analyse huge rows of data without having to know what the heck a Data Cube even is.

Office Applications: PowerPoint
PowerPoint gets some nice new 3D transitions for use between slides. There is also more flexibility in animations, and a new animation painter lets you copy animation between objects. Embedding video into your presentations has been made easier even if you want to add effects such as refection, borders and recolouring. You can even trim sections from videos with ease. Presentations can now be broadcast to anyone via the internet, even if they are using a mobile device such as a Smartphone. The compression feature has also been improved so sending the presentation by email is more viable.

Office Applications: Outlook
The grouping of related messages together, no matter what folder they are in has been improved with the new conversation view. There are also tools related to this feature which can help to "clean up" a folder, removing redundant messages where their text is contained in the body of other messages, feature that has been missing from outlook for too long, and a tool to ignore a conversation and all subsequent messages on the same subject.

Also new is the "Quick Steps" feature where you can define common actions such as "Move this message to this folder and mark it as read" or "forward this message to TUcKeR and flag it as important". This feature is easily one of the best new improvements to Outlook, and with them always being available to you in one or two clicks this can speed up mail handling quite significantly.

Office Applications: Publisher
Publisher has now also been updated to use the ribbon interface and Backstage, and this also greatly enhances its usability. It has also inherited some technology from Visual Studio which makes the laying out of pages and the aligning of objects far more easier.

Office Applications: Access
Access has received a minor update which includes conditional formatting as seen in Excel and a major overhaul which allows it to work more closely with SharePoint. You can now easily design an Access database and then have it published it to SharePoint for everyone in a department or company to use. The macro editor has been given a complete rewrite and you can now design data macros which work on the data whether it is shown in a form, a datasheet or a list.

Editions
As of the time of this review there will be six different editions of Office 2010 available.
• The free Starter Edition - Consisting of ad-supported, cut-down versions of Word and Excel is designed to be given away with new PCs.
• Home & Student Edition - This gives you three licences for Word, Excel, PowerPoint and OneNote for non-commercial use within a family.
• Home and Business Edition - Has the five major applications: Word, Excel, PowerPoint, OneNote and Outlook
• Standard edition - This also contains Publisher. It appears that Standard Edition will only be available through volume licensing.
• Professional Edition - This will be available through Retail or Volume Licensing, contains Word, Excel, PowerPoint, OneNote, Publisher and Access.
• Professional Plus Edition - Consists of InfoPath, Communicator and SharePoint Workspace and again this edition is only available to volume licensing customers.

Enjoy a fine-tuned computer with Norton SystemWorks ™ 2006. This multi-purpose solution keeps your computer healthy, preventing and solving many common problems. Its antivirus protection - the most trusted on the planet - keeps your computer safeguarded against damaging virus attacks and dangerous spyware. And if trouble does occur, Norton ... more...